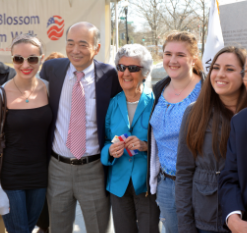 L-R. Anna Yusov, Ambassador Sasae, Jodie Bernstein, Olivia Magnussen, and Adrienne Coulter. Yusov, Magnussen and Coulter are students at George Washington University. GW students visited the Memorial following JAVA speakers talk at GW University history department. The students, led by Alyssa Coulter, saw the Memorial littered with trash and ask if they could clean the Memorial at regular intervals. They have since been diligently performing this task. They were recognized at this event. Photo by Jim McCullum

Capitol Hill, Washington. The 16th Annual Cherry Blossom Freedom Walk, the first major event of the three-weeks long National Cherry Blossom Festival, was held at the National Japanese American World War II Memorial to Patriotism amidst the just blossoming cherry trees on a sunny Spring day, April 5, 2014. About 500 people attended the standing room only one hour program which featured keynote speaker Joan Z. Bernstein, Chair of the Commission on Wartime Relocation and Internment of Civilians. Other speakers included His Excellency Kenichiro Sasae and Congresswoman Eleanor Holmes Norton of the District of Columbia. Former Secretary Norm Mineta was not able to attend.

The program was jointly sponsored by the National Japanese American Memorial Foundation (NJAMF), Japanese American Veterans Association (JAVA), Japanese American Citizens League, WDC Chapter, and Ekoji Buddhist Temple. Nen Daiko, based at Ekoji Temple, which has provided entertainment at all Freedom Walks, performed flawlessly, beating the drums to say goodbye to the bleak winter and welcome to the explosion of pastel blossoms of the cherry trees, which Japan gifted to America in 1912.

Dan Matthews, Chairman of the Board of NJAMF, remarked that Nisei volunteered for combat duty “to protect our freedom of choice.” Congresswoman Norton discussed the symbolic significance of the Memorial and Congressman Mineta’s role in getting legislation passed to build the Memorial. Ambassador Sasae noted that the first place he visited upon arrival in Washington, DC, to assume his duties was the Memorial, the symbol of ethnic Japanese treatment during World War II and of their courage and patriotism to help America win the war and defeat prejudice and racism. He also observed that the “cherry blossom has long been a symbol of enduring and close friendship between Japan and USA.” JAVA President Gerald Yamada provided background information about the role played by Bernstein as chair of the Commission on Wartime Relocation and Internment of Civilians (CWRIC), mandated by Congress, whose findings served as the basis of the Civil Liberties Act of 1988. 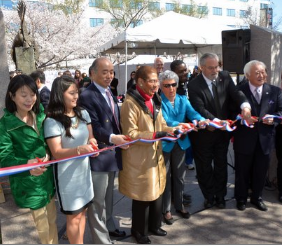 Bernstein provided the history, conclusions, and impact of the CWRIC. She said that CWRIC was established in 1980 to conduct a study of Executive Order 9066. The nine member commission held hearings in various US cities and Pribilof Islands and heard testimonies of over 750 witnesses. In 1983, the CWRIC findings were included in a 467-page report entitled Personal Justice Denied, which (1) concluded that internment was not necessary, that it was caused by war hysteria, racial prejudice and the failure of political leadership, and (2 ) recommended that legislation be passed consisting of an official government apology; redress payments to each of the survivors; and a public education fund to help ensure that this kind of tragedy would not happen again. The Civil Liberties Act of 1988 (Public Law 100-383) incorporated these recommendations.

Following the program, the ribbon was cut to mark the start of the one mile walk by over 100 enthusiasts to enjoy the thrill of walking amidst the flowering nation’s capital. The chair of the 16-person 2014 Freedom Walk Committee was Martha Watanabe.