Rome, Italy. Friends and Family of Nisei Veterans (FFNV) sponsored a 43-person tour from May 20 to June 2, 2013 to the battle fields in Italy where the 100th Infantry Battalion and the 442nd Regimental Combat Team, both segregated Japanese American units, fought during World War II. The 100th Battalion, comprised of 1,432 pre WW II draftees from Hawaii, landed in Salerno, south of Naples and worked northwards liberating one Italian town after another. The casualty rate was high and the press dubbed them the “Purple Heart” Battalion. Replacements were drawn from the 1st Battalion, 442nd Regimental Combat Team, then in training at Camp Shelby, Mississippi. The 442nd arrived in Civitavecchia, located north of Rome, minus the 1st Battalion. The two units merged, the 100th becoming, in effect, the 1st Battalion of the 442nd. The 100th was allowed to keep its unit designation in recognition of its outstanding combat record. Following the merger, the combined unit serving as 442nd RCT proceeded to fight on in Italy, France, and back to the Italian front during 1944-1945. 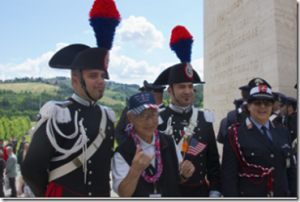 Roy Fujiwara, second from left, with Italian National Military Police (carabineri] officers in formal uniform to participate in the ceremony at the American cemetery in Florence, Italy. Photo by Brian Yamamoto.

One member of the tour group was a 442nd veteran, Roy Fujiwara, 95, Company L. A native of Seattle, Washington, who now lives in Hawaii, Fujiwara joined the 442nd at Sospel, France and participated in the Rhineland, Apennine, and Po Valley campaigns. After the all night climb of Mount Folgorito, located in Italy’s Tuscany region, on April 4, 1945, Fujiwara was severely wounded in the battle to breach the German Gothic line which resisted allied invasions for the previous five months. Returning to the scene of battle 68 year later, Fujiwara said “I have sad memories. I lost a lot of buddies here.” After being shot in the face, he was among the first to be carried down the cliff, for fear of him dying from wounds. His awards include the Combat Infantryman’s Badge, Purple Heart Medal, Bronze Star Medal. He is most proud of the Regiment’s seven Presidential Unit Citations. He said he could not make the climb to the top of Mount Folgorito so he asked his son, Tod, to make the climb on his behalf. While making the trek up Mount Folgorito, Tod said he felt the spirits of the 442nd/100th  who had fought there.  “It felt like someone was looking out for us; protecting us. I had butterflies in my stomach as I anticipated the climb. After making the climb and steep decent in rain and hail, I felt very proud of my dad and his 442nd comrades,” Tod said.  Local historian Davide Del Giudice was the principal escort. Del Giudice said he enjoys briefing Americans and escorting them on Italian battlefield tours “because of the role Americans played to protect our democratic way of life and the brotherhood displayed by them.” 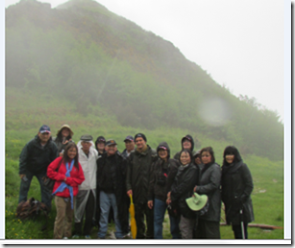 The tour was led by Dr. Brian Yamamoto, who is already planning the 442nd/100th 70th Anniversary Tour to France July 7-20, 2014. Any questions concerning the Italian tour or the forthcoming France tour should be directed to Yamamoto (brianeyamamotodds@yahoo.com; 907-590-9442) or Debra Stern at Peak Travel 800 999-2608. Any questions pertaining to Fujiwara and Mount Folgorito should be directed to Peggy Mizumoto (pmizum@earthlink.net).