Richmond, Virginia. In a moving ceremony before the General Assembly of the Commonwealth of Virginia on February 24, 2015, the General Assembly presented a resolution to members of the Japanese American Veterans Association (JAVA). The resolution was agreed to by both the House of Delegates and the Commonwealth of Virginia Senate to commend Japanese American veterans of World War II. Delegate L. Scott Lingamfelter, a retired US Army Colonel, presented a framed copy of the resolution to JAVA’s president, Wade Ishimoto, who was accompanied by Colonel Dale Shirasago (USAF Ret), Colonel Derek Hirohata (USAF), and Lt Colonel Mark Nakagawa (USA Ret). Delegate Lingamfelter introduced the JAVA attendees and paid honor to Messrs. Terry Shima and Grant Ichikawa, both World War II veterans that were unable to attend the ceremony. Delegate Lingamfelter read the resolution and invited fellow veterans from the House of Delegates and the Senate to join in the presentation. 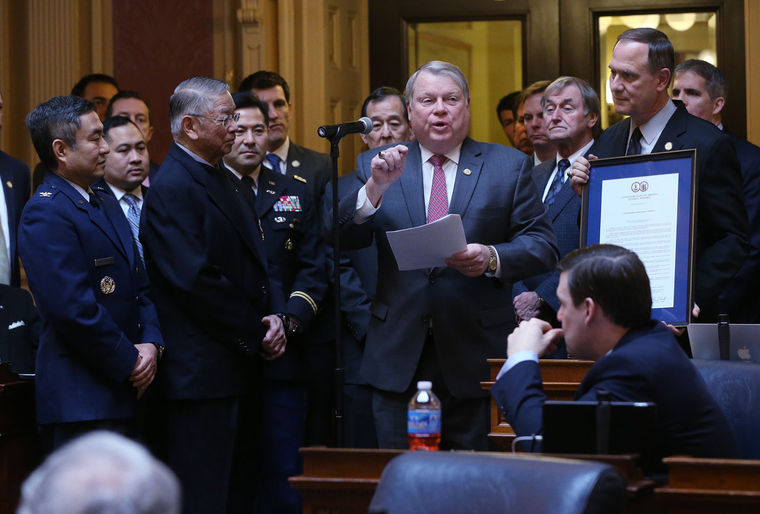 Whereas, in response to the attacks on Pearl harbor in 1941, all people of Japanese ancestry were initially viewed as disloyal to the United States, their draft classification was changed to 4-C (alien, unfit for military duty) and 118,000 ethnic Japanese – two thirds of them United States citizens – were forcibly placed in internment camps under military guard; and

Whereas, Americans of Japanese ancestry from the Hawaiian Provincial Infantry Battalion (the 100th infantry Battalion) were shipped from the Hawaiian islands to California, and through their demonstrated performance, helped convince the President and the War Department to reopen military service to 14,000 Nisei, many of whom were drafted into military service from internment camps where they and their families were incarcerated; and

Whereas, the 100th infantry Battalion was eventually made an integral part of the 442 Regimental Combat Team (RCT) collectively became known as the Go for Broke Regiment and fought with distinction in Italy and France despite suffering extremely heavy combat and noncombat casualties; and

Whereas, the members of the Go for Broke Regiment earned 21 Congressional Medals of Honor, 29 Distinguished Service Crosses, and one Distinguished Service Medal, over 350 Silver Stars, 22 Legion of Merit Medals, 15 Soldier Medals and more than 5,300 Bronze Stars and over 4000 Purple Hearts; and

Whereas, the MIS was awarded numerous combat awards such as one Presidential Unit Citation, one Distinguished Service Cross, five Silver Stars, over 50 Bronze Stars, 20 Combat Infantryman Badges, 25 Purple Hearts, and such non-combat awards as two Legion of Merit Medals and one Soldier’s Medal; and

Whereas President Truman, following his review of the 442nd RCT in 1946, affirmed Japanese-American loyalty by declaring “you fought not only the enemy by you fought prejudice and you have won”; and

Whereas, in 2010 the United States Senate and House of Representatives unanimously approved a bill awarding the Congressional Gold medal to veterans of the 100th Infantry Battalion, 442 RCT, and the MIS, which was ultimately signed by President Obama on October 5, 2010; and

Whereas, the combat performance of these soldiers contribute to the climate for the post World War II reforms, beginning with the desegregation of the Armed Forces, and helped level the playing field for minorities to compete for any job and rank; and

Whereas competing with the best of the best Nisei have reached the highest ranks of the military, government, academia, and business, thereby confirming that the Japanese-American story speaks of the greatness of America; now, therefore, be it

Resolved by the House of Delegates, the Senate concurring, that the General Assembly hereby commend the service and sacrifice of Japanese American veterans of World War II; and be it

Resolved further that the Clerk of the House of Delegates prepare a copy of this resolution for presentation to the Japanese American Veterans Association on behalf of those patriotic soldiers as an expression of the General Assembly’s gratitude for their service to the citizens of the Commonwealth, the Nation and the World. 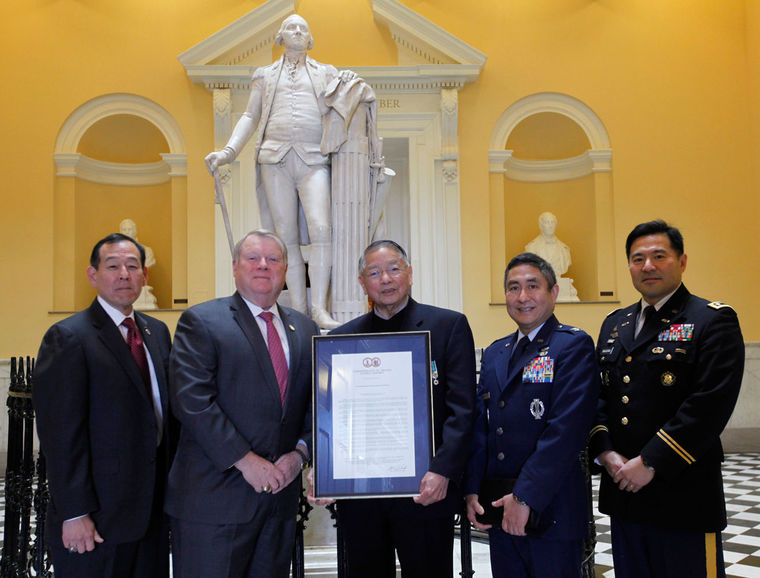