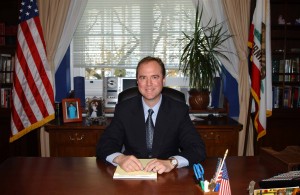 Washington, DC. California U.S. Representative Adam Schiff will receive the Japanese American Veterans Association’s (JAVA) Courage, Honor, Patriotism Award at its Spring quarterly luncheon at Harvest Moon Restaurant in Falls Church, Virginia, on March 14, 2015. The award recognizes Representative Schiff’s initiative in introducing the legislation that ultimately resulted in the awarding of the Congressional Gold Medal to the 100th Infantry Battalion, 442nd Regimental Combat Team (RCT), and the Military Intelligence Service. This honor is the highest that Congress can bestow upon its citizens.

Representative Schiff, son of a World War II veteran, introduced his original Bill (H.R. 347) which passed in 2009 with nearly 300 co-sponsors. Following this, Senator Barbara Boxer introduced her bill, (S-1055) including an amendment to add the Military Intelligence Service, in the US Senate that passed on September 25, 2010. President Barak Obama signed the bill into law on October 5, 2010, witnessed by 6 Nisei veterans and other White House invitees.

Over 300 Nisei veterans, most of them over 90 years of age, with about 2,500 widows, next of kin and relatives, visited the nation’s capital for the award ceremony on November 2, 2011, at the Emancipation Hall of the US Congress. The Hall and two theaters accommodated 1,250 attendees. The overflow crowd saw the program over video at the Washington Hilton’s Columbia Hall. National viewers saw the program broadcast over commercial television networks and the Pentagon channel.

After his participation in the CGM award ceremony, Representative Schiff said, “It was a thrill to stand next to the brave Japanese-American members of the ‘Go For Broke’ regiment and the veterans of the Military Intelligence Service today as they were awarded with the Congressional Gold Medal for their dedication to our country during World War II. These remarkable men left a segregated nation to fight and defend an America with no guarantee that their own freedom would be defended in return.” 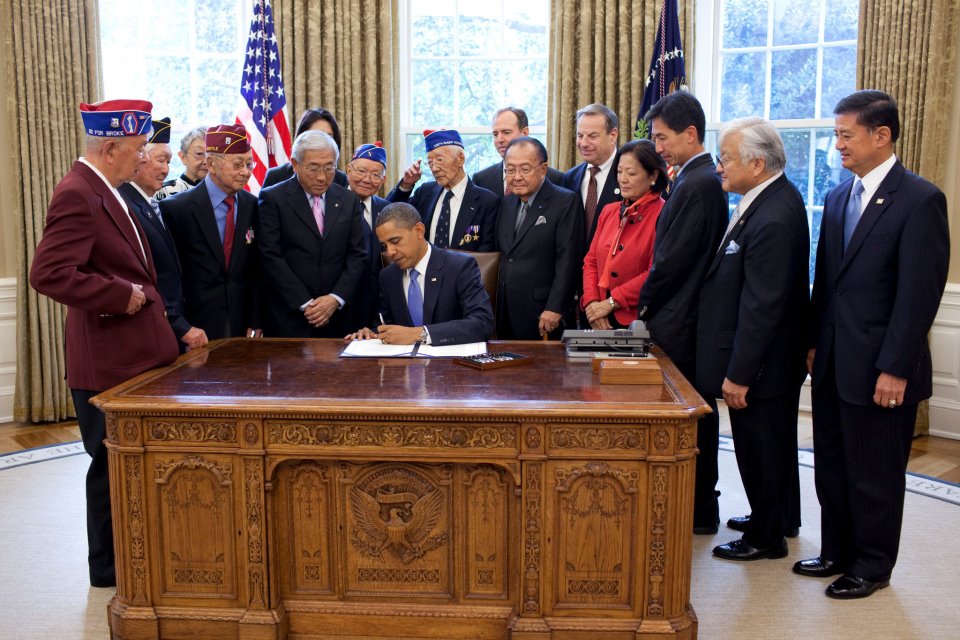 Only one Gold Medal was minted by Congressional mandate, however, the US Mint produced replicas of the CGM in bronze, a number of which were purchased by local veterans. Also, they were bought by civic organizations which, in turn, presented them in ceremonies to the qualified veterans who were not able to make the long journey to Washington.

The CGM honoring the Japanese American veterans has since completed a nationwide tour, arranged by the National Veterans Network (Christine Sato-Yamazaki, Executive Director), to seven locations including New Orleans, Honolulu, Los Angeles, San Francisco, Portland, Chicago and Houston. The CGM is now on display at the Price of Freedom exhibit at the Smithsonian National Museum of American History.

To the veterans of the 100th Battalion and 442nd RCT, the CGM, as the highest civilian award, stands out as true national recognition in addition to their military awards that included seven Presidential Unit Citations, 21 Medals of Honor, 29 Distinguished Service Crosses, 560 Silver Stars, 22 Legion of Merit Medals, 15 Soldier’s Medals, 4,000 Bronze Stars and over 4,000 Purple Hearts. The US Army has declared that the 442nd RCT, including the 100th Battalion, as the most highly decorated unit during World War II for its size and period of combat.