Throughout his legislative career, US Senator Daniel K. Akaka worked tirelessly to recognize the contributions made by Japanese Americans veterans by inserting in the Congressional Record the Nisei contributions to their nation; by enacting legislation which resulted in the review and upgrade of medals, by getting the US Army to write a book on the Military Intelligence Service, and by facilitating the correction of records of thousands of Asia Pacific American veterans. During his chairmanship, the US Senate Committee on Veterans Affairs produced an unmatched record of new laws on health care and compensation benefits for Veterans. This is a presentation to recognize Senator Akaka’s contributions to Veterans. 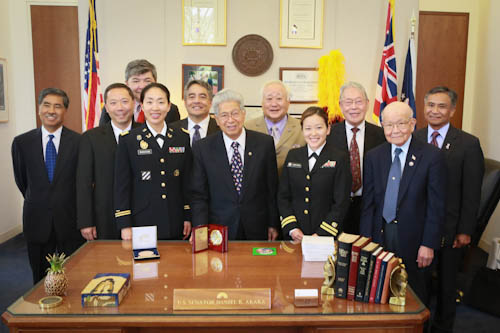 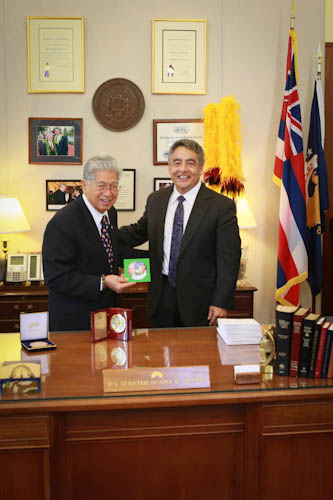 Senator Akaka, thank you for making time in your busy schedule to meet with us, representatives of the Japanese American Veterans Association. We wish to express our gratitude for your public service on behalf of all veterans. You have championed issues that are important to veterans and you are truly a friend and supporter of all veterans and their families. You have a long and personal relationship with JAVA and have been an honorary JAVA chair since JAVA was first organized in 1993.

Thank you for coming here today to pay me this high honor. Although there was no mass internment of persons of Japanese ancestry in Hawaii — thanks to a military governor who affirmed that mass internment was unnecessary – I was dismayed to witness the discrimination, prejudice, and racism against Japanese Americans embodied in emergency regulations emanating from Washington. The detention of persons of Japanese ancestry in Hawaii – many of them loyal to America — and the mass internment in America, affected me deeply.

When I became a U.S. senator I was determined to correct the injustice done to persons of Japanese ancestry, particularly those who served in the uniform of our country. I wanted to tell the American people that three thousand Nisei loyally served in the Asia Pacific Theater fighting against people of their same racial heritage. The American people did not know of the unique role they had in WW II because of the nature of their work. The Nisei of the Military Intelligence Service (MIS) obtained time-sensitive Information, derived from translation of captured enemy documents, interrogation of prisoners of war, interception of enemy communications, which was used tactically by military commanders against the enemy. There are numerous reports of military commanders who, acting on this intelligence, adjusted their troop formations and other tactics to defeat enemy forces. The Nisei saved the lives of thousands of American soldiers and contributed to the ultimate defeat of Japan.

The Nisei intelligence role was classified and was referred to as General Douglas MacArthur’s “secret weapon”. There was no publicity of their accomplishments until the mid-1970’s when the Freedom of Information Act allowed their war time experiences to be told.

That is the reason I asked the Secretary of the Army to commission Nisei Linguists: Japanese American in the Military Intelligence Service During World War II. This book, published in 2007, covered the story of the Nisei who served in the MIS during WW II, the demobilization of the Imperial Japanese armed forces, and the early post war period. These talented linguists, who were augmented by 3,000 additional trained linguists, served in the Occupation of Japan from the lowest administrative (village) jurisdiction to the national level. They served in every phase of the Occupation, in functional positions and as liaison officers between Japanese officials who did not speak English and American officials who did not speak Japanese. The Nisei contributed to the success of the Occupation and Japan’s recovery to become a leading economic power and American partner.

Nisei Linguists: Japanese American in the Military Intelligence Service During World War II. adequately addressed the Nisei role during WW II and the immediate post war period. However, I felt there was also a need to publicize the Nisei efforts in the Occupation of Japan. Last year I wrote a letter to the Secretary of the Army asking that another research effort be commissioned which, when completed, will fully document that story. I am deeply impressed with the Army’s use of the Nisei in WW II and in the Occupation of Japan.

You should know that I voted against going to war with Iraq. I voted against the Iraq war because the armed forces did not have an exit strategy like the Army had in WW II, using the Nisei to help rebuild a conquered nation. On two occasions, the Army, in response to my question, told me they were “working on an exit strategy”. I was convinced they did not have one. I felt the Army should have recruited Iraqi Americans, provided them with linguistic and cultural training, and deployed them in the Occupation of Iraq, just as the Nisei were deployed in Japan.

Concerning the Medal of Honor (MOH), it bothered me that the 100th and 442nd were awarded only one MOH and that only because of congressional intervention. I directed my staff to do preliminary research on this issue. The results convinced me I should ask the Army to review all Asian Pacific American Distinguished Service Cross awards to determine if they were unfairly evaluated for the MOH. Legislation was passed and the Army researchers went to work. They produced the names of more than 100 Asian Pacific Americans who were awarded the DSC. Out of this number the Army review recommended that 21 of them be upgraded to the MOH.

About that time, I learned of a Nisei medic who was recommended for the MOH but who was downgraded to DSC because Army tradition and eligibility precluded consideration of anyone who “didn’t carry a gun”. I felt this was terribly unfair and introduced legislation to have this anomaly corrected. Congress approved my bill in record time, the Army reviewed the case favorably, and I was given the honor of calling James Okubo’s family to give them the news that Okubo would be posthumously awarded the MOH. On June 21, 2000, President Bill Clinton awarded 22 MOHs to Asian Pacific Americans in a moving White House ceremony.

I am pleased and privileged to have done what I did for the Japanese Americans soldiers of the great conflict. They would not have pursued such recognition for themselves — they were far too modest and unassuming. I believe that justice has at last been done. I commend JAVA and other Japanese American veterans organizations for telling the Japanese American story to the American public so that their heroic service and Go For Broke spirit in defense of freedom and democracy in WW II will never be forgotten. I wish also to commend the Japanese Americans who fought with the same dedication in the Korean War, Vietnam War, the Gulf Wars, and of course Iraq and Afghanistan. They fought, and continue to fight, with their heart and soul, for the best of America.

Based on Terry Shima’s notes.
If there are any questions, please contact Terry Shima (301-987-6746; ttshima@comcast.net)