Falls Church, Virginia.  US Senator Daniel K. Akaka, Chairman of the Senate Committee on Veterans Affairs and an Honorary Chairman of the Japanese American Veterans Association (JAVA), outlined his four-point legislative program designed to ensure veterans get the care and benefits they deserve.  Akaka made his remarks at the JAVA quarterly luncheon at the Harvest Moon Restaurant in Falls Church, Virginia, on October 18, 2008.   At the same luncheon Brigadier General Edwin “Skip” Vincent, USAF discussed the US Air Force Pacific Command’s strategy for the US air defense of the Pacific region. 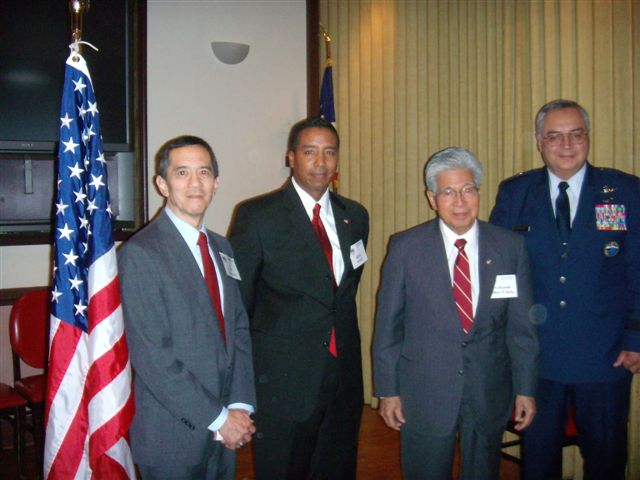 Akaka paid tribute to the 100th Battalion, the 442nd Regimental Combat Team and the Nisei who served in the Military Intelligence Service.  He announced that the US Army is writing a book on the Japanese American contribution to the Occupation of Japan that enabled Japan “to emerge from destruction of WW II as the strongest of political allies and economic partners” of the USA.  He said the Go For Broke National Education Center will have a major role in the collection of data for this book.

General Vincent spoke about the US Air Force Pacific Command's strategy as one that is focused on protecting the homeland, as well as, along with partnering nations, deterring aggression, responding to disaster, and, when needed, fighting and winning.  This strategy underlines the need to respond to changing demands.  It is, he said, important that our veterans participate in the oral history program, noting that, “It allows us to better respond to the past, present, and future needs of our veterans.  Future generations need to understand the price of freedom and security.”

Vincent enlisted in the Hawaii Army National Guard in 1973, was commissioned as a 2nd Lieutenant, and transferred to the Air Guard in 1982.  Following his training as a navigator, he began his career with the Hawaii Air National Guard.  He has more than 2,000 flight hours and has flown 23 combat missions during the Balkan conflict.

For this occasion, a special guest, Mr. Takahiro Yamago, 2nd Secretary of the Embassy of Japan, and successor to Mr. Yudai Ueno, also was in attendance.   30