PHOTOS:   Being Sent along with this Press Release.

EXTRAORDINARY REUNION OF WWII VETERANS OF THE 36TH (TEXAS) DIVISION, 405TH FIGHTER SQUADRON AND 442ND RCT AND THE FRENCH OF THE VOSGES MOUNTAINS

Austin, Texas.  In November 2007, when a young Frenchman, Gérôme Villain, found two rusted belly tanks dating from WWII in the Vosges mountains of eastern France, little did he realize they would  inspire an extraordinary reunion of the parties to what has become known as the “Lost Battalion” story.   Pilots of the 405th Fighter Squadron dropped these belly tanks which were filled with ammunition, food, medical and other supplies to sustain the soldiers of the “Lost Battalion”, the 1st Battalion/141st Regiment of the 36th (Texas) Division.  These soldiers were cut off behind enemy lines in a perilous week-long battle for survival in October 1944 before being rescued by the Japanese American 442nd RCT.

Villain was determined to return these artifacts “home” to Texas.  As soon as Jeff Hunt, Texas Military Forces Museum Director, learned of the news, he set about finding a way to bring them to the Museum.  Through a generous donation by FedEx, the belly tanks arrived in Austin, where Hunt convened a 2-day event to celebrate their unveiling on July 18-19.   Hunt said that “64 years after their use to sustain the trapped men, the belly tanks today serve as a symbol to bring together the parties to this story”.  Indeed, it was a moving gathering of veterans and their families, including two representatives from the Vosges region of France, Gérôme Villain and Hervé Claudon.  Erwin Blonder, of the “Lost Battalion”, delivered a heartfelt tribute of appreciation to the Japanese Americans of the 442nd RCT, recognizing the huge number of casualties they incurred in the rescue.

This symposium gathered together for the first time four parties of this story:  Veterans of the “Lost Battalion”, the 405th Fighter Squadron, the 442nd RCT and representatives from the Vosges, whose people aided the Allies in combat and cared for wounded soldiers.

Franz Steidl, author of The Lost Battalions:  Going For Broke in the Vosges, Autumn 1944,  set the scene by taking the audience back to 1944 describing the battle conditions as well as the climate back home in the U.S. for the Japanese Americans, many of whom were uprooted into internment camps.  He was followed by Lt. Blonder, forward observer with the 131st Field Artillery, LTC Eliel “Arch” Archilla, of 405th Fighter Squadron and T/4 Yeiichi Kelly Kuwayama, Medic with Co E, 2nd Battalion, 442nd RCT.

The audience heard of the Lost Battalion’s spirit in dealing with its impossible situation, repelling constant enemy attacks with limited supplies, while coping with constant hunger and freezing, wet conditions.  Although a command decision had grounded all other aircraft in the region due to dense fog and heavy cloud cover, the 405th pilots negotiated these critically adverse conditions as well as enemy fire to provide the essential lifeline to the trapped soldiers by dropping these belly tanks.  The Japanese American soldiers of the 442nd RCT fought through the heavily mined forest in brutal

As part of the event, Captain Martin Higgins, Commander of the “Lost Battalion”, was inducted into Texas Military Forces Hall of Honor.  His son, Michael Higgins, said “The lesson of the Lost Battalion is courage and perseverance.” 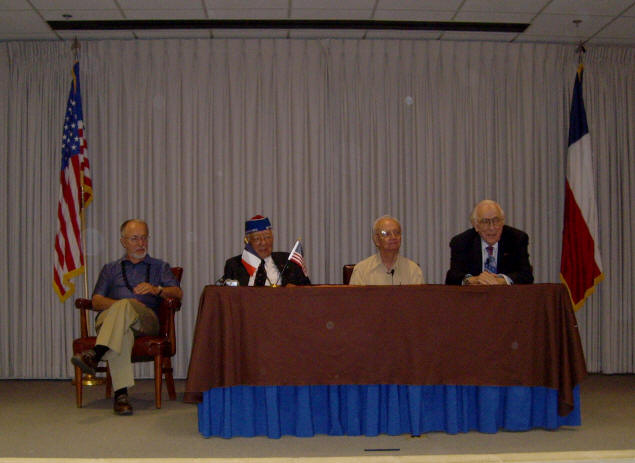 The French-American friendship born during the war continues today encompassing the younger generations.  Villain and Claudon read messages of friendship from the people of Bruyères and from the Community of the Communes of the Vologne Valley and Brouvelieures.  The Texans presented the French visitors with a Texas flag signed by the veterans and symposium attendees to share with the people of the Vosges.  The 442nd Veterans Club of Hawaii and the Japanese American Veterans Association presented the Frenchmen, Hunt and Higgins, with 442nd insignia pins.

This symposium brought together not only several parties to the story, but also multiple generations.  Some participants heard different facets of the story for the first time and others learned only now of the war experiences of their fathers and grandfathers.

Texas Military Forces Museum’s invitation to and program for the symposium: