SENATOR AKAKA TO LAUNCH PUBLICATION OF COMPREHENSIVE HISTORY OF NISEI IN THE MILITARY INTELLIGENCE SERVICE.  NISEI HEROICS IN PACIFIC THEATER WERE CLASSIFIED SECRET UNTIL EARLY 1970’S.

Washington, D.C.  Senator Daniel K. Akaka (D-Hawaii) will officiate at the public release of the historical work, “Nisei Linguists:  Japanese Americans in the Military Intelligence Service During WW II” on March 20, 2007 at 4:00 – 5:30 PM, in a special ceremony at the Russell Senate Office Building, Room 418.  “Nisei Linguists” was written by James C. McNaughton, PhD, and is a 514 page history of the Japanese Americans (“Nisei”) who served in the Asia Pacific Theater.  This book was just published by the US Army Center for Military History (CMH).   In addition to Senator Akaka and the CMH, other co-sponsors of the event are the US Army Public Affairs Office and the Japanese American Veterans Association (JAVA).  Jeffrey J. Clarke, PhD, is the Director of CMH. 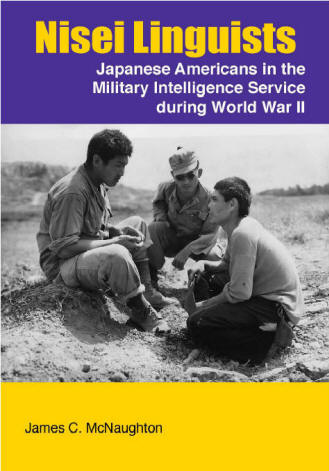 While the heroism under fire of the famous all Nisei US Army 442nd Regimental Combat Team in Italy and France was highly publicized during and after the war, the role of the MIS remained under a tight lid of secrecy until early 1971.  For reasons not clear to this day, US military authorities chose not to disclose to anyone that it had the capability to read captured Japanese Top Secret documents, diaries, and maps.  Ishio told Akaka that America should know about the Nisei who volunteered from internment camps to fight against the Japanese, in a demonstration of loyalty and belief in democracy.

Convinced of the need that the Nisei contributions to the war effort in Asia must be told as a significant part of American military history, Senator Akaka and seven other members of congress petitioned the Secretary of the Army, who approved the writing of the book.   Dr. McNaughton, then Command Historian of the Defense Language Institute, was commissioned to undertake this written project.   Dr. Mc Naughton, who received his doctorate in modern European history from the Johns Hopkins University and is retired from the US Army Reserve as a lieutenant colonel, subsequently became the Command Historian of the US Army Pacific Command, and is now Command Historian of the US European Command.

In the Pacific, 3,000 Nisei soldier-linguists served with every military branch of service and in every major military campaign from the Aleutian Islands to Guadalcanal, New Guinea and Australia; from India to Tonga; and from Palau, Saipan, Iwo Jima, and Okinawa to the demobilization of the Japanese military structure.  US Army Nisei also were assigned to the military units of Great Britain, Australia, India, New Zealand and Canada under similar conditions.

An additional 3,000 graduates of the MIS Language School served during the Occupation of Japan from the municipal to the national levels and contributed to its success. They also served with the Tokyo War Crimes Trials, counterintelligence, and censorship. With their knowledge of the language and customs, they served as a bridge between Japanese and US officials that solidified the US-Japan alliance.   30