Washington, DC.  Retired General Eric Shinseki was sworn in on January 21, 2009, in a White House ceremony as the seventh Secretary of the Department of Veterans Affairs (DVA).  “The overriding challenge I am addressing from my first day in office is to make the DVA a 21st century organization focused on the Nation’s Veterans as its clients,” Shinseki said.  In a January 25 notice to veterans service organizations DVA added "Shinseki plans to develop a 2010 budget within his first 90 days. Key issues on Secretary Shinseki’s agenda include (1) implementation of an enhanced GI Bill education benefit that eligible veterans will begin using next fall, (2) streamlining the disability claims system, (3) leveraging information technology to accelerate and modernize services, and (4) opening VA’s health care system to veterans previously unable to enroll in it, while facilitating access for returning Iraq and Afghanistan veterans."

One week before, the US Senate Committee on Veterans Affairs, chaired by Senator Daniel K. Akaka, endorsed Shinseki unanimously, praising him as the right person for the job.  The Committee room was filled to capacity mainly by Shinseki’s classmates at the US Military Academy, the press, representatives of veterans organization, including a dozen members of the Japanese American Veterans Association, representing Asian American veterans. 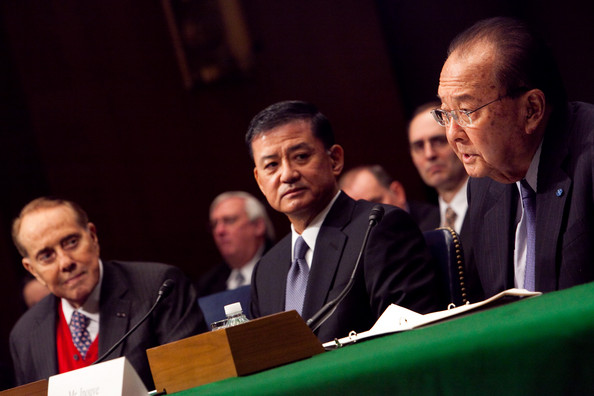 Immediately following Akaka’s opening remarks, former Senator Bob Dole and Senator Daniel Inouye introduced Shinseki.   Dole said, “I cannot think of a better person to look after our 25 million plus veterans than this true American hero who has done about everything one can think of in serving his country…He will be a strong voice for vets …” Inouye, after describing Shinseki’s “unflinching devotion to country and duty” and his integrity remarked, “This is the kind of man I want to see as Secretary of DVA.”

Ranking member Richard Burr told General Shinseki, “You would be entrusted with one of the most noble mission’s of our Federal government – caring for the men and women who have served and sacrificed on behalf of our entire nation…It is clear you have the experience, leadership skills and determination.”

Secretary Shinseki is credited with the transformation of the US Army into a highly mobile strike force deployable with minimum lead time.  In his opening statement, Shinseki expressed a similar far-sighted goal in DVA:  Its “transformation into a 20th century organization.”. Shinseki described his plans to bring state of the art remedies and solutions to veterans in a timely manner.  The driving force of his administration will be “people-centric, results-driven, and forward-looking.”  He will rely heavily on DVA’s highly skilled work force to achieve these goals.

Christine Sato-Yamazaki, President and CEO of the Go For Broke National Education Center (GFBNEC), in a her statement to Japanese American veterans, wrote “It has been a privilege and an honor to work with Secretary Shinseki over the past two years while he served as national spokesperson for the GFBNEC. Though we miss him, we know that Secretary Shinseki's visionary leadership is being put to good and needed use.”

Seattle, Washington Nisei Veterans Committee Commander, Lieutenant Colonel Yuzo Tokita, US Air Force (Ret), Vietnam War fighter pilot, said “On behalf of NVC members and its Foundation, I would like to add our congratulations to Secretary Shinseki.  Mr. Secretary, you continue to do us veterans and all Japanese Americans proud and we look forward to your leadership and promise to work with you to help achieve your ‘forward-looking goals.’”