WASHINGTON – At a ceremony in the East Room of the White House on Feb. 15, 2013, President Obama awarded World War II veteran Terry T. Shima the 2012 Presidential Citizens Medal, the nation’s second-highest civilian award. Shima was one of 18 recipients of the medal, hand-selected by the President from over 6,000 candidates for “strengthening the sacred trust between America and its veterans.”

In his remarks, President Obama recognized recipients “for the shining example that you set every single day and the inspiration that you give each of us as fellow citizens, including your President.” 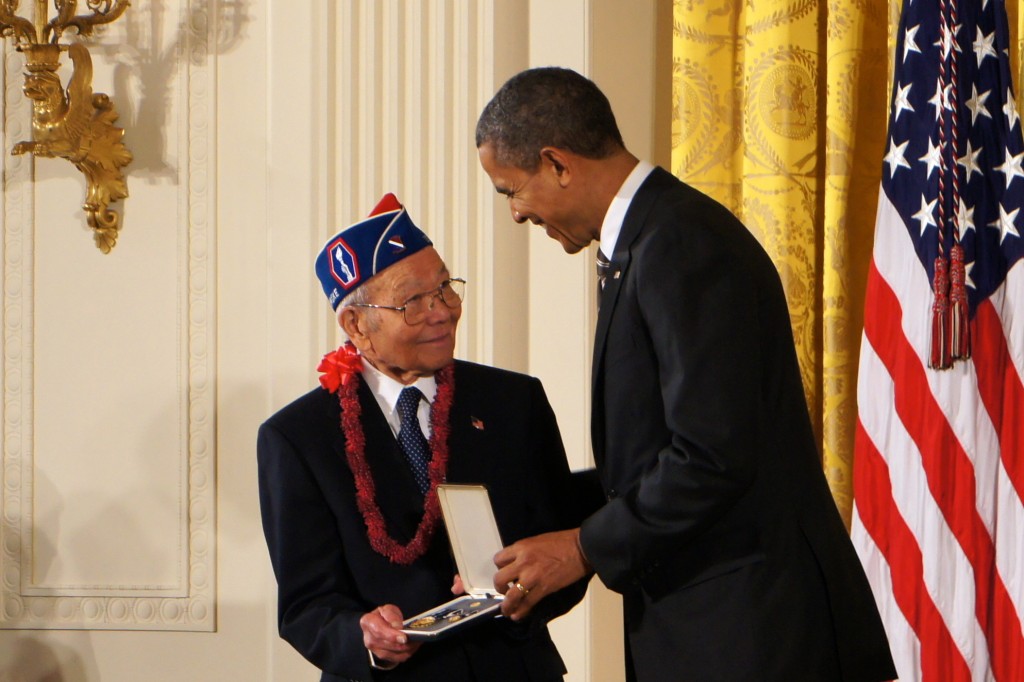 February 15, 2013 – President Obama awards Terry T. Shima with the 2012 Presidential Citizens Medal at a ceremony in the East Wing of the White House. (Photo by the Japanese American Veterans Association)

Shima, 90, of Gaithersburg, Md., was born and raised in Laupahoehoe, Hawaii and served in the Army’s 442nd Regimental Combat Team, a segregated unit comprised of Japanese Americans, which became one of the most decorated units of its size in American history. Shima “ensured returning heroes received a welcome befitting their service and sacrifice.” Shima’s award citation recognized his work “as the Executive Director of the Japanese American Veterans Association, where he committed himself to preserving the stories of service members who fought and bled overseas, even while many of their families were relocated to internment camps at home.”

When asked what his reactions were in receiving this award, Shima said, “In a word, awesome.” He said, “There are others far more deserving to receive this Medal than I, however, having been designated, I accept this award on behalf of my family who has given me their total support.”

“I am so proud of my father,” said Shima’s daughter, Eileen Roulier. “Our family sees how deeply he cares and how hard he works to tell the Japanese American story, but he certainly never expected this medal. It’s an incredible gift of recognition,” said Roulier. “I believe in his heart he shares this honor, completely and thoroughly, with my mother, who supported him throughout their 65 years of marriage. What an amazing team. I am profoundly grateful for the inspiration and guidance they’ve given me over the years.”

“I accept this medal on behalf of the volunteers at the Japanese American Veterans Association and for the men who fought in Europe and the Pacific, including my older brother, Hideichi Shimabukuro, to settle the question of loyalty once and for all and to help level the playing field for minorities,” said Shima. “I also accept this medal for the over 800 men we left on the battlefields of Europe and the Pacific, and for the post-World War II Japanese American men and women who competed with the best-of-the-best to build America’s greatness.”

Gerald Yamada, President of the Japanese American Veterans Association, praised Shima’s service. “This award recognizes Terry’s tireless efforts as a 442nd Regimental Combat Team veteran, as Executive Director, and now as the chairperson of our Education and Public Outreach Committee to preserve the legacy of the contributions of the World War II Nisei soldiers. Terry brings honor to all of us.”

“Given all the work, time, dedication and effort that Terry has expended over all these years on behalf of the veterans and the total community, there is no one who is more deserving of this recognition,” said former Secretary of Transportation and Secretary of Commerce Norman Mineta. “I know that the thousands of Japanese American veterans who served in World War II and those who ultimately made the supreme sacrifice on behalf of all of us are really smiling and saying ‘Well done, Terry, and thanks a million!’”