Fairfax, Virginia; Rockville, Maryland. On November 20, 2012, the Chairman of the Fairfax County, Virginia, Board of Supervisors sponsored a Resolution at its regular meeting honoring the county’s World War II veterans of the 100th Infantry Battalion, 442nd Regimental Combat Team, and Military Intelligence Service (MIS) who received the Congressional Gold Medal (CGM). This resolution confirmed the heroism of these veterans and “urged all residents to join in recognizing these men for their selfless acts of dedication and patriotism to their country.” One week later, on November 27, 2012, Montgomery County, Maryland, Council, located in Rockville, presented a Proclamation to veterans of these same units. The Proclamation, signed by County Executive Isaiah Leggett and County Council President Roger Berliner, recognized the county’s veterans and “thanked them for overcoming one of the most difficult periods in US history and for making the heroic sacrifices that helped create the world as we know it today.”

The United States Congress, in a dignified ceremony at the US Capitol on November 2, 2011, presented the Congressional Gold Medal, the highest civilian honor the nation can bestow on an individual or organization, to the men of the 100th Battalion, 442nd Regiment, and MIS. Over 350 veterans, many in wheel chairs, came to Washington, DC for this event.

Grant Ichikawa, MIS veteran who served in Australia, Philippines and Japan, accepted a copy of the Resolution on behalf of all 100th, 442nd and MIS veterans residing in Fairfax County. Standing with Ichikawa were two MIS veterans, Fred Murakami, former President of Japanese American Veterans Association, and Yukio Kawamoto. Sharon Bulova, Chairperson of the Fairfax County Board of Supervisors and sponsor of the Resolution, praised the Nisei for their courage and determination to prove Japanese American loyalty to their nation. She also cited the perseverance of ethnic Japanese who were involuntarily confined in internment camps during World War II. Following the presentation, the Council invited the veterans, family members, and friends to an elegant reception in a room near the Supervisors’ chamber.

Mr. Terry Shima, 442nd veteran who served in Italy, accepted the Proclamation from County Executive Leggett and Council President Berliner on behalf of 100th, 442nd and MIS veterans, widows and families who reside in Montgomery County. Council President Berliner read the one page Proclamation, which described the wartime experience of the honorees, which included both Japanese American and Caucasian officers.

Ichikawa and Shima presented appropriate remarks to thank the respective county governments for these recognitions. The presentation ceremonies at each event were attended by about 50 persons.

Fairfax County, Virginia, Board of Supervisors on November 20, 2012 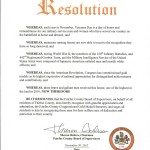 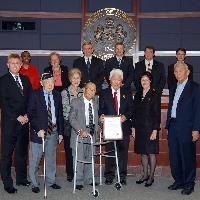 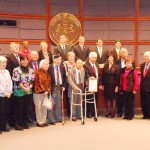 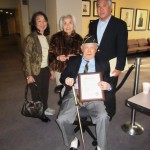 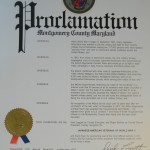 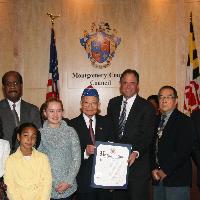 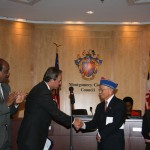 Presentation of Proclamation to the 100th Battalion, 442nd RCT and MIS. 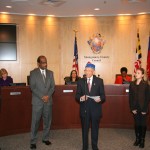