Two Japanese Americans Promoted to key positions in US Army

The Pentagon, Washington, DC. Lieutenant General John F. Campbell was promoted to General and appointed to serve as the Army’s 34th Vice Chief of Staff on March 8, 2013, and Major General James L. Huggins, Jr. was promoted to Lieutenant General and succeeded Campbell as Deputy Chief of Staff (DCOS), G-3/5/7 on March 8, 2013. The mothers of both generals are Japanese. Campbell is the second Japanese American to reach the four star General rank, the first being General Eric Shinseki, USA (Ret), Secretary of the Department of Veterans Affairs. LTG Huggins’ previous position was Commanding General of the 82nd Airborne Division and Commander, Regional Command South, International Assistance Force, North Atlantic Treaty Organization, Afghanistan. Huggins’ new portfolio includes Army operations (G-3); plans (G-5) and training (G-7). Both Campbell’s and Huggins’ appointments required nomination by the president and confirmation by the US Senate. 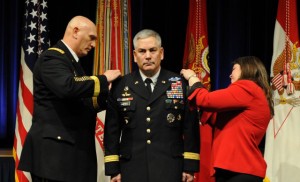 GEN Ray Odierno, Army Chief of Staff, and Ann Campbell, pin the 4th star on General John Campbell’s shoulder boards at a Pentagon ceremony on March 8, 2013. He is the 34th Deputy Chief of Staff of the US Army. (U.S. Army photo.)

General Raymond T. Odierno, Army Chief of Staff, who officiated at General Campbell’s promotion program, said, “As we continue to move forward with this great Army of ours it’s important that we pick the right leaders as we address these challenges in the Army … John Campbell is one of those leaders I want by my side as we navigate these very difficult times. He will be the one who helps me and the Secretary as we reshape the Army of the future.”
General Odierno and Campbell’s wife, Ann, replaced her husband’s three-star shoulder boards with four-star shoulder boards of a full general. Secretary of the Army John M. McHugh officiated at the swearing-in ceremony. As the Vice Chief of Staff, Campbell will be responsible for most of the Army’s day to day management. He is well regarded across the Army and other services for his acumen as a war commander steeped in battlefield strategy and operations. 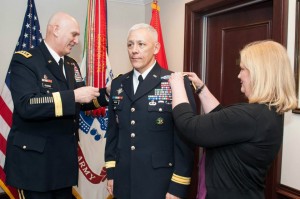 LTG Huggins third star was” pinned on” by General Odierno and Mrs. Melissa Huggins on March 8th, 2013 in the office of the Army Chief of Staff. LTG Huggins was commissioned through ROTC into the Infantry in March 1980 after graduating from the University of Georgia, South Athens, Georgia. He also attended military schools such as the Infantry Officer Advanced Course at Fort Benning, Georgia and the Army Command and General Staff College at Fort Leavenworth, Kansas.

LTG Huggins served in various Army units at overseas and domestic posts, including his home state of Hawaii, however, the majority of his line assignments were with the 82nd Airborne Division. Before commanding the 82nd in Afghanistan, Huggins served as director of operations, readiness and mobilization for the deputy chief of staff for operations and plans for the U.S. Army.

LTG Huggins participated in the operation to capture Manuel Noriega of Panama known in the Army as Operation Just Cause. He was involved in the defense of Kuwait and Saudi Arabia from Iraqi invasion, the Iraq War at different stages from the defeat of Saddam Hussein to the Occupation and the withdrawal of American forces.

Prior to leaving Afghanistan in 2011 as Commanding General of the Division, he observed “I’m done here …There are no more jobs in the 82nd Airborne Division. I was very fortunate to command at nearly all levels…This is the best division in the U.S. Army because of the men and women who choose to serve here…The stars don’t matter.”