[EdNote. This is a story of a Nisei linguist, Edward Mitsukado, who served with the Merrill’s Marauders in Burma during WW II. His letter to the Commander of MIS Language School was circulated to the high levels of the War Department. Mitsukado’s remarks attest to Nisei dedication and loyalty to their nation and confirm the valuable intelligence contributions made by Nisei linguists to the war effort. JAVA appreciates Dr. Bradsher preparing this article and Archivist Eric Van Slander for providing the document that accompanies this article. Mitsukado passed away in 2002 and his wife and two children are also deceased.]

College Park, Maryland. Technical Sergeant Edward Mitsukado of Honolulu, Hawaii, a Nisei linguist with the 5307th Composite Unit (Provisional), code-named Galahad, and more familiarly known as Merrill’s Marauders (named after Brig. Gen. Frank Merrill, its commander) decided to write a letter in mid-June 1944 to the Commandant of the Military Intelligence Service Language School (MISLS) at Camp Savage, Minnesota, about what he had been doing and to suggest improvements for MISLS training. Colonel Kai Rasmussen, the Commandant, liked hearing informally from his former students about what they were doing and what lessons they had learned that could be used by the school in its training of translators and interpreters. 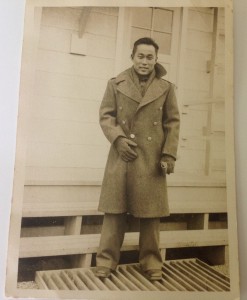 Edward Mitsukado. Taken at Camp McCoy, Wisconsin, prior to his transfer from the 100th Infantry Battalion to the Military Intelligence Service.

Mitsukado began his “Somewhere in Burma” letter to Colonel Rasmussen by indicating “that the 14 boys who left Camp Savage Sept. 13 of last year [1943] with Capt. [William A.] Laffin have done their job in magnificent style. They have conducted themselves as soldiers throughout the campaign, and officer[s] and men of this outfit have only the highest praise for them. They volunteered to come over with the volunteer outfit and have proved themselves beyond any doubt and question.”

After mentioning the death of Laffin, who was killed in action on May 18 at the Battle of Myitkyina, Mitsukado reported that presently he and most of his colleagues were still operating in the front, and the others had been evacuated and were probably enjoying a well-deserved rest. Continuing, he wrote,“Fighting out here is heavy and goes on day and night. You can hear the machine guns, rifles, and big guns all through the hours. You go to sleep hearing them and wake up with the din still in your ears. Occasionally the Japanese throw their big shells over this way, and the whistling shells makes you start thinking and wishing for a haven like Savage. Thomas K. Tsubota and I have a dugout that gives us good security. At nights the firing, the tracers, flares, and the fires make one think of a big New Year’s celebration in Chinatown.

“Adding to our discomfort out here are the flies that stick to you during the day and mosquitoes that like to serenade to you all night. You can’t eat a meal without a million flies joining you. Then also the dreaded monsoon has set upon us, and you have all the water and mud you’d ever wish to see and roam around in.”

After mentioning a “Good Morning” greeting he had received from General Stilwell, Mitsukado noted,
“Marching on the Ledo Road and all through the jungles of a very rough and difficult terrain, we hit the Nips in surprise moves that caught them napping….The marching, close to a thousand miles, was tough and rugged, what with a full field pack, 3-5 days rations, ammunition, rifles, and other odds and ends on your back. Besides those some of us interpreters carried an extra bag containing necessary books and papers. Jungle life is hard to describe. One goes into it with romantic ideas, but that is soon replaced with realism born of sweat and grime and fatigue that hits you to your very bones….”

Mitsukado then proceeded to write about the combat experiences of the interpreters, noting “they never hesitated” and had “faced danger, willingly, whenever called upon.” After making suggestions for MISLS training, he concluded the letter by writing, “Again I say the boys you sent out here in Burma are carrying on, never forgetting the faith you had in them and the spirit of our officer [Laffin], who, I know, is watching our work from above.”

Mitsukado’s letter reflected the tough and very harsh mission of Merrill’s Marauders, a U. S. Army long-range penetration special operations unit in Burma in World War II. Members of this unit began assembling and training in India during the fall of 1943. In February 1944, some 2,750 members of the unit, in an operation designed to disrupt Japanese offensive operations, marched into Burma. During the next five months, in the Burmese jungle behind Japanese lines, the unit fought in five major engagements (including at Walawbum and at the Myitkyina airfield) and engaged in combat with the Japanese on thirty-two separate occasions. As Mitsukado indicated in his letter, “all through the campaign our unit has swept everything before it. We have met the Nips in their chosen ground and have beaten them at every turn.” 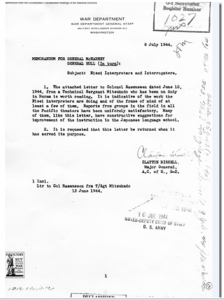 The 5307th Composite Unit (Provisional) unit came to an end on August 10, 1944, when the remaining Marauders were consolidated into the 475th Infantry, another long-range penetration unit. Subsequently General Merrill commissioned Mitsukado a Second Lieutenant and he continued to see service in the China-Burma-India Theater, as did most of the other members of Mitsukado’s group. For their service with the Marauders, each Nisei linguist/infantryman received the Combat Infantryman’s Badge, Bronze Star medal and, in addition, one was awarded the Legion of Merit and the appreciation from all with whom they served.

Rasmussen would make a copy of Mitsukado’s letter available to Major General Clayton Bissell, the Assistant Chief of Staff, G-2, and Bissell, in turn, sent a copy of it on July 8, 1944, with a cover letter to Generals McNarney and Hull. Major General J. E. Hull, then Acting Assistant Chief of Staff of the Army’s Operations Division, responded to Bissell on July 12, indicating that in the organization of the second “Galahad Force” arrangement there would be a Nisei detachment and that this was in accord with General Stilwell’s desires, “who recognizes the great value of this personnel in assisting Galahad type operations.” This new organization, the 5332nd Brigade (Provisional), was activated on July 26, 1944, and would include the 475th Infantry, as well as a team of Nisei translators and interpreters. A date stamp on the Bissell memo indicates that the Deputy Chief of Staff of the US Army has seen that memorandum.

Mitsukado (1912-2002), a former court recorder in Honolulu, was serving in the reknown Japanese American 100th Infantry Battalion when he was transferred to the MIS because of his Japanese language abilities.