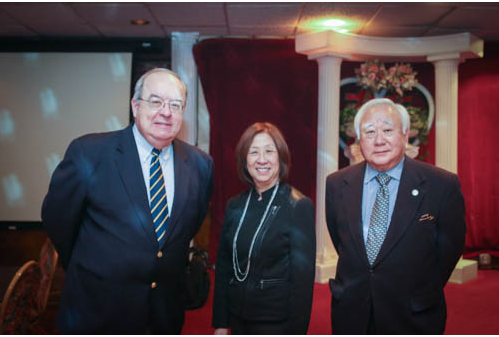 Takai discussed her birth and early life in the Detroit, Michigan, area, education at the University of Michigan (BA in mathematics and MA in management), and her 30-year career at Ford Motor Company, where she led the development of the company’s information technology strategic plan. Beginning in 2003, she served as Director of the Michigan Department of Information Technology (MDIT) and as the state’s Chief Information Officer (CIO). She then served as the State of California CIO, a cabinet level position, from which she advised the Governor on information technology matters and led more than 130 CIOs and 10,000 information technology employees spread across the state’s different agencies, departments, boards, commissions and offices. She described her responsibilities and challenges of her present Defense Department position to which she was appointed on October 26, 2010.

During his 31-year Foreign Service career, Ambassador Malott served as ambassador to Malaysia, deputy assistant secretary of state for South Asian Affairs, and consul general in Osaka, Japan. He also held positions as director and deputy director of the State Department’s Office of Japanese Affairs and as American consul in Kobe, Japan and Bombay, India. As President and Chief Executive Officer of the Japan America Society of Washington (JASW), Malott has invited JAVA to partner with JASW, including participation in speaking programs and the provision of a booth at the JASW annual Sakura Matsuri which is held in conjunction with the National Cherry Blossom Parade. This venue allows JAVA to contact the American public not normally reached through traditional programs. In presenting the Courage, Honor, Patriotism award to Ambassador Malott, Gerald Yamada, Japanese American Veterans Association (JAVA) President, recognized the partnership between JAVA and the JASW. In his acceptance remarks, Ambassador Malott affirmed this close relationship.

Luncheon attendees bade a warm farewell to Connie Ishio, widow of COL Phil Ishio, USA (Ret.), Military Intelligence Service veteran and Founding President of JAVA, who is moving to Arizona to be closer to her family members. She was presented with a JAVA Service pin.