Washington, DC. This article provides a description of the two cranes written by its sculptor, Nina M. Akamu, and also a brief background on the sculptor. The next time you visit the National Japanese American Memorial to Patriotism, located near the Capitol Building on New Jersey and Louisiana Avenues and D Street, pause in front of the cranes and reflect on Nina’s remarks. 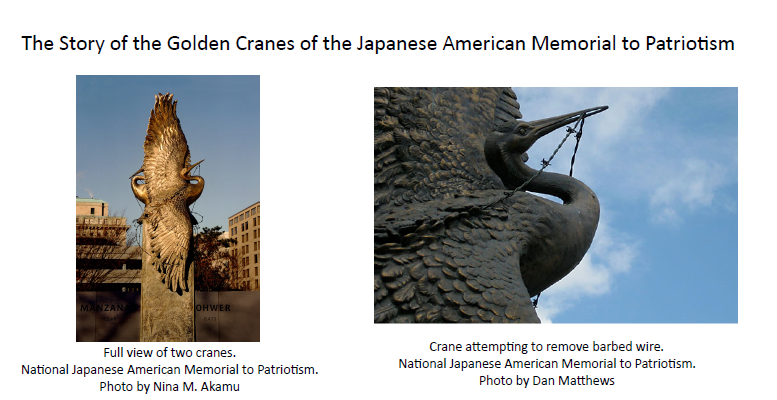 SYMBOLIC MEANING OF THE GOLDEN CRANES
THE NATIONAL MEMORIAL TO PATRIOTISM, WASHINGTON, DC

Created by renowned sculptor Nina Akamu for the National Memorial to Patriotism, the sculpture symbolizes the unique experiences of Japanese Americans during World War II. It promotes a national healing for 120,000 persons of Japanese ancestry who were forcibly imprisoned in relocation camps without regard to their constitutional rights; the sculpture honors the 33,000 WWII Japanese American veterans; and provides hope that America will remember the harsh lessons learned from its past struggles to overcome present and future challenges.

The bronze centerpiece depicts two golden cranes symbolizing freedom and longevity. The barbed wire signifies the internment, injustices and sacrifices suffered by Japanese Americans during WWII. Grasping the barbed wire with their beaks, there is optimism and hope for freedom, as each crane presses its powerful free wing, supporting the other. Reaching skyward, they unite in a single cause against the bonds of prejudice and injustice.

The sculpture’s design pays a solemn tribute to the heroism and sacrifices of Japanese American veterans who fought and died for this country. Visually, the symmetrical outline of the cranes’ bodies form the silhouette of the urn. Arising from the urn, the golden vertical wings are transformed into the eternal flame of freedom as they reflect the brilliance of the sun. By identifying with the eternal flame of freedom used in the military insignia of the 442nd Regimental Combat Team and in the logo of the Japanese American Veteran’s Association, this design honors the veterans’ willingness to preserve the flame of freedom by answering the call to service, while their families were imprisoned in America’s concentration camps.

At its full height of 14 feet, the liberated golden wings rise above the stark granite walls. This shining beacon of hope presents the Japanese American experience as an example of triumph over adversity and is a compelling demonstration of faith to freedom loving people everywhere.

Nina’s mother’s father, a Japanese immigrant, owned a plantation store for 20 years and was a respected community leader in Kauai, Hawaii. On December 7, 1941, he was detained by the FBI at Sand Island, Pearl Harbor. He became ill and died of heart failure while still incarcerated. Her father, Ah Kui Akamu, of Chinese-Japanese ancestry, was a US Air Force senior master sergeant. During his 28 years of service, she and her family moved with him to his various posts, including Japan, where Nina was influenced by Japanese art and design, especially netsuke, Japanese miniature sculpture.

Nina graduated from the Maryland Institute College of Art in Baltimore. She later moved to Italy. For seven years, she lived in Pietrasanta and become very familiar with the towns of Massa, Carrara and other places in Versiglia where the 442nd Regimental Combat Team fought. At Pietrasanta, a monument of Private First Class Sadao Munemori, posthumously awarded the Medal of Honor, stands in remembrance of him and the Allied, including Nisei, liberators. She also visited Monte Cassino where the 100th Infantry Battalion sustained huge casualties and visited other Nisei battle sites in Italy. In Germany, she visited the death camp at Dachau.