Capitol Hill, Washington, DC. “When I became a US Senator, I was determined to correct the injustice done to persons of Japanese ancestry, particularly those who served in the uniform of our country,” US Senator Daniel K. Akaka told representatives of the Japanese American Veterans Association (JAVA) on September 27, 2012, when they visited him at his office in the Hart Building of the US Senate. He is America’s first Senator of Native Hawaiian ancestry, and the only Chinese American member of the United States Senate. 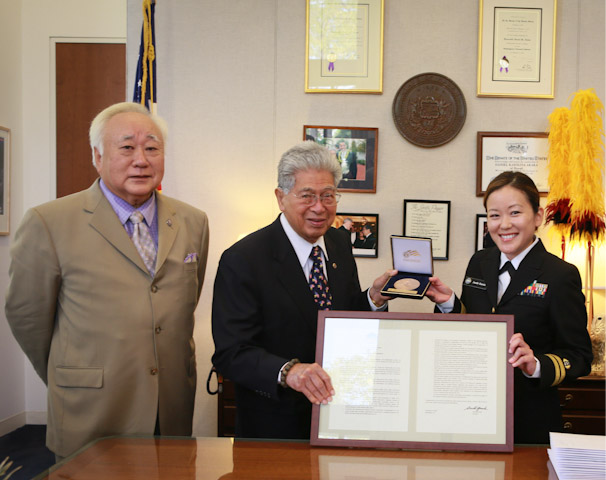 Already the recipient of JAVA’s highest award, The Courage, Honor, Patriotism Award, in 2007, Senator Akaka was presented with JAVA’s Lifetime Achievement Award, a framed citation which listed his major accomplishments for veterans, including Japanese Americans, an inscribed desk clock and a replica of the Congressional Gold Medal that was bestowed upon the 100th Battalion, 442nd Regimental Combat Team, and the Military Intelligence Service (MIS) last Fall.

In presenting the award, JAVA President Gerald Yamada, told Senator Akaka “you have championed issues that are important to veterans and you are a true friend and supporter of all veterans and their families. You have a long and personal relationship with JAVA and have been an Honorary JAVA Chair since its inception in 1993.” The inscription on the desk clock and the medal case said “For outstanding leadership and support on veterans matters.”

Senator Akaka said he was deeply touched by this recognition and he philosophized on his support for all veterans, including the Nisei veterans. He said he was especially pleased with the upgrades of 22 Distinguished Service Crosses to Medals of Honor and of the 514-page US Army publication Nisei Linguists: Japanese Americans in the Military Intelligence Service During World War II. He also said the US Army has committed to write another book on the Nisei’s unique contribution to the Occupation of Japan, which he termed the military’s “exit strategy” of the Asia Pacific War. The Senator commended JAVA, other Japanese American veterans organizations, and museums for publicizing the Japanese American World War II experience to the American people. 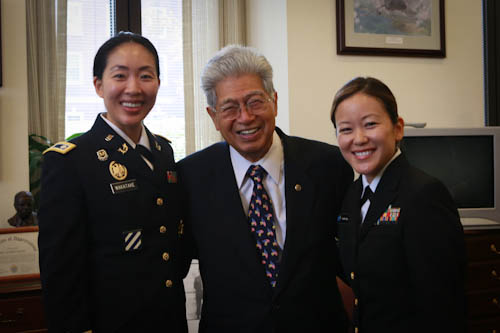 The citation of the JAVA award, read by Lieutenant Janelle Kuroda, USN, a US Navy legal officer, referred to Senator Akaka’s distinguished service of 14 years in the House of Representatives and 22 years in the US Senate, including his chairmanship of the Senate Committee on Veterans Affairs which produced “an unmatched record of new laws affecting veterans health care and compensation benefits. Kuroda enumerated other highlights of the Senator’s distinguished legislative career, such as his creation of the Office of Minority Veterans in the US Department of Veterans Affairs (DVA), contribution to the establishment of Hawaii’s first DVA medical center at the Tripler Army Medical Center in Honolulu, support of the Native Hawaiian Government Reorganization Act and support for the creation of the MIS Historic Learning Center in San Francisco by the National Japanese American Historical Society. Various veterans organizations contributed to the preparation of the citation.

[Editor’s note: JAVA plans to put on its website (www.JAVADC.org) a copy of the Citation, photos and related papers pertaining to the Senator Akaka award presentation. Your review of the Citation is recommended.]