Falls Church, Virginia. On October 12, 2013, Robert Nakamoto, immediate past president of JAVA, was awarded the Terry Shima Leadership Award for 2013 for his leadership and diplomacy in further establishing the Japanese American Veterans Association (JAVA) as a premier nationwide Asian American veterans organization. The presentation was made at the JAVA quarterly luncheon attended by 70 JAVA members and friends at the Harvest Moon Restaurant. Nakamoto was also recognized for “his sustained service” and “unselfish contribution of his energy, vision, expertise and resources” to JAVA. Having served as President of JAVA from 2007 – 2011 and as a member of the Executive Council prior to and since that time, he is presently the Chair of the JAVA Finance Committee. Nakamoto is a long time supporter of various Asian American organizations, including JAVA. Among his many interests in the Japanese American community, Nakamoto has been instrumental in the printing of the JAVA quarterly newsletter, “The JAVA Advocate.” 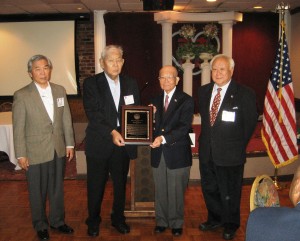 Nakamoto is currently Chairman of Amour, LLC, and Chairman of InterAmerica Global, both involved in international exports. He was former Chairman and principal owner of Base Technologies Inc., McLean, VA, a long time information technology company. Prior to that he was Director of Corporate System, MCI, Deputy Commissioner for Planning for the state of Texas (Honorary Texas Citizen), Director for Planning of Medicare and Medicaid Programs in the Federal Government, and positions in California state and local governments. He has served on Presidential Task Force for both parties. He received the coveted Japan’s Foreign Minister Award in recognition of his efforts to enhance Japan-US relations. He was born in California, graduated from California State University and is a veteran of the Korean War.

Grant Ujifusa, a Sansei from Wyoming, founding editor of the “Almanac of American Politics,” which George Will and Tim Russert called “the bible of American politics,” was the keynote speaker. Ujifusa spoke of his key role and experience in the enactment of the Civil Liberties Act of 1988, also known as House Resolution (HR) 442 and the Redress Bill. He said the Redress Bill was passed because of the thousands of people, including a key role played by then Congressman Mineta, who worked to make it happen. In the end, however, it was ultimately approved because of the combat record of the “Nisei soldiers during World War II.” There were four Nisei soldiers who featured prominently in the approval process; they were “Mike Masaoka, US Senators Spark Matsunaga and Daniel Inouye, and Kaz Masuda. Without them, I think we can also say that redress would have had no chance” 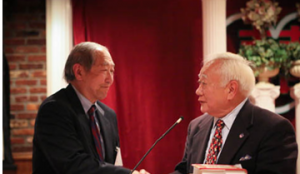 Ujifusa recalled that Masaoka was a “single most gifted leader in American history…he could think, speak and act with great precision and compelling force…a big time problem solver” and as good a lobbyist as the best in Washington.” Ujifusa provided examples to support these statements.

Ujifusa also observed that “No one worked harder to make redress a reality than US Senator Spark Matsunaga. After three intense years, he put together, largely by himself, a solid bipartisan coalition of 69 yes votes. And so to him we owe Senate passage of S. 1009 [Senate Bill Number 1009]…The reason the bill received so much support was that nearly all of Sparky’s Senate colleagues just loved him.”

President Ronald Reagan was publicly opposed to HR 442 for two years and it was Kazuo Masuda, a 442nd soldier that caused Reagan to sign the Bill. On one of his visits to Jerome, Arkansas internment camp, Kazuo told his sister if he were killed he wished to be buried in Fountain Valley, California, his hometown. When he was killed, his sister went to Fountain Valley to make funeral arrangement but was told by the town fathers “…we don’t bury Japs in our cemetery.” When General Vinegar Joe Stillwell, Commanding General of the China-Burma-India Theater, under whom Nisei in the Merrill’s Marauders served, heard about this response he visited Fountain Valley and told the officials: “This soldier is going to be buried here, and we’re going to make an example of you SOBs and make a big deal of it, too. I am going to give the Distinguished Service Cross to Kaz’s mother in a ceremony at the Santa Ana Bowl.” The town officials reversed their decision. The ceremony was held on December 10, 1945. After Stillwell spoke and awarded the medal, then Army Captain Ronald Reagan got up and said:

“Blood that has soaked into the sand is all one color. America stands unique in the world, the only country not founded on race, but on a way – an ideal. Not in spite of, but because of our polyglot background, we have had all the strength in the world. That is the American way… “

While at Random House in New York, Ujifusa edited a book, “The Politics of Inclusion,” by Thomas Kean, who, was the Governor of New Jersey. After contacting the Governor Kean, Ujifusa was told that the President was coming to New Jersey to campaign for Republican state legislative candidates in October, 1987. Kean readily agreed to bring up redress with the President during his political swing through New Jersey when he briefed the President on HR 442. On one 35-minute trip together between campaign stops, Governor Kean discussed redress and produced a letter from Kaz Masuda’s sister, June, to the President that reminded the President of his 1945 speech at Kaz Masuda posthumous award ceremony. President Reagan subsequently called Governor Kean and said, “I remember that day at the ceremony for Kaz Masuda. I think redress is something I want to do.” On August 10, 1988, in a ceremony attended by over 100 Japanese Americans and members of Congress, Ronald Reagan first re-read the same words he had said at Kaz Masuda’s posthumous award ceremony 43 years before – and then he proceeded to sign the bill.

[EdNote: For a full text of Mr. Ujifusa’s speech, please read the transcript of the keynote speech at the luncheon.]