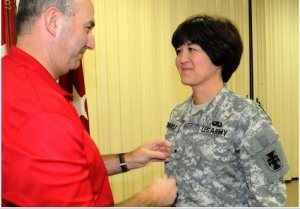 Army Reserve Brig. Gen. Miyako N. Schanely, Black River, is pinned for the rank of general by her husband, Steve, at a ceremony in December in Vicksburg, Miss. A second ceremony affirming the rank was held on January 4, 2014 at Fort Drum. ARMY PHOTO

Schanely told Watertown Daily Times (New York) staff writer, Gordon Block, in a January 7, 2014 article, “It’s absolutely an honor,” to receive this recognition and hope this will pave the way for more women to be promoted to flag rank. Schanely’s stepfather, Harry Harushi Tanabe, an Army warrant officer, performed counterintelligence work in the Pacific during World War II as the rest of his family was forced into an internment camp. “We’re just incredibly proud of him and his whole generation that went through that,” General Schanely said.

After graduating from the U.S. Military Academy at West Point in 1986, General Schanely served seven years of active duty, which included construction work in Germany and humanitarian efforts in Panama, before transitioning to the U.S. Army Reserve in 1993. In the more than 20 years in the reserves, she has served in units at stateside installations such as Fort Drum, New York, and Fort Dix, New Jersey. Her overseas assignments included Riyadh, Saudi Arabia, and humanitarian missions in Panama, Uruguay, Belize and Honduras.

US Senator Mazie Hirono , a member of the Senate Committee on Armed Services and the first Asian American woman to serve in the U.S. Senate, was pleased to receive the news of General Schanely’s promotion. “Congratulations to General Schanely on her promotion to the rank of Brigadier General,” said Hirono. “Not only has she served her country with honor throughout her career, she is a trailblazer who brings diversity to our armed forces as only the second Japanese American woman to reach flag rank. Diversity matters and it is critically important to ensure more Asian American and Pacific Islander women are in the leadership pipelines of the military, federal government and business. General Schanely has family ties to Honokaa on Hawaii Island. I share the state’s pride in her latest success.”

BG Schanely holds a Bachelor of Science in Engineering Management from West Point, a Master of Business Administration from the University of Rochester, a Master of Arts in Community Economic Development from Southern New Hampshire University, and a Master of Strategic Studies from the United States Army War College. Her career awards include the Legion of Merit, Meritorious Service Medal with Silver Oak Leaf Cluster, the Army Commendation Medal with Silver and Bronze Oak Leaf Clusters, the Army Achievement Medal, the Parachutist Badge and the Jungle Expert Badge.

In her civilian role, as the Executive Director of the State University of New York (SUNY) North Country Consortium, General Schanely oversees a partnership of SUNY campuses bringing a variety of degree programs to the Northern New York area. With her husband, Steve, she resides in Black River, New York, and has two grown children. BG Schanely’s mother, Miyako Tanabe, who was born in Honokaa, Hawaii, resides in Waldorf, Maryland. She served in the US Air Force with the rank of Captain. Both mother and daughter are life members of JAVA.

The Times article reported that when asked by friends about her future in the military, General Schanely said she told them she has no plans to leave anytime soon. “My answer is I’m still having fun; I’m still making a difference,” she said. “As long as I can continue to do that, I’m going to stay in.”