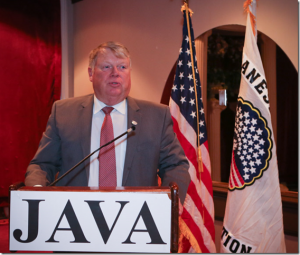 Falls Church, Virginia. Delegate L. Scott Lingamfelter, a member of Virginia House of Delegates, and Jenny Chen, editor-in-chief at Asian Fortune newsmagazine, addressed the Japanese American Veterans Association (JAVA) quarterly luncheon held at the Harvest Moon Restaurant at Falls Church, Virginia on October 25, 2014. Delegate Lingamfelter, who represents parts of Virginia’s Fauquier and Prince William counties and is a retired Army Colonel, described his sponsorship of a House Resolution entitled “Celebrating the life of Robert Nakamoto.” Nakamoto was recognized for his contribution to Virginia’s economy via his firm, Base Technologies, and his leadership in various civic organizations. A history enthusiast, Lingamfelter described heroism during a battle in the Normandy Invasion and highlighted the service and decorations of the 100th Infantry Battalion and the 442nd Regimental Combat Team. He ended by saying that these collective actions and efforts demonstrated the spirit that makes the United States a great country. He met two World War II Nisei veterans who were present.

Jenny Chen, editor-in-chief of Asian Fortune newsmagazine, spoke about the importance of stories and storytelling. She talked about her experiences as an Asian American and how her work as a journalist and multimedia producer have introduced her to many stories that have affected her life. She said that stories have a huge potential to touch peoples’ hearts and change their perspectives. Chen urged members of JAVA to think about their stories and offer their experiences and perspectives to the community. 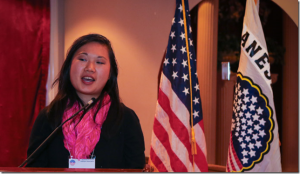 President Gerald Yamada discussed JAVA’s current major activities. He said JAVA’s “Giving Back Program,” started in 2012 with the national fund drive for Honor Flight, a program to bring World War II veterans at no cost to them to see their Memorial in Washington, DC. The proceeds from the 2014 national fund drive will go to Fisher House Foundation, a network of hospitality houses where military and veterans’ families can stay without charge, while a loved one is receiving medical treatment. Yamada said “one hundred percent of donations received by JAVA will be donated to the Fisher House Foundation at the Veterans Day Program at the National Japanese American Memorial to Patriotism on November 11, 2014. Since JAVA does not charge dues, donors are requested to make a donation to support our wounded soldiers in lieu of dues payment. [Checks may be made payable to “JAVA” with “Fisher House Foundation” placed on the memo line. Your check may be sent to Mark Nakagawa, JAVA Treasurer, 9455 Park Hunt Court, Springfield, VA 22153.]”