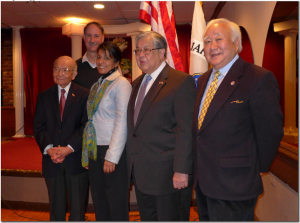 Falls Church, Virginia. Edward Chow, Jr., Maryland’s Secretary of Veterans Affairs since 2009, told JAVA members on January 11, 2014 that the number of veterans claims in the state of Maryland has risen by 78% during the past 5 years and, similarly, diversity has increased in membership of the state’s five commissions pertaining to veterans. One such commission is the Charlotte Hall Veterans Home, located in Waldorf, which has maintained its four-star rating on Medicaid/Medicare certification and has opened a wing for women veterans. Chow also said the state’s five veterans cemeteries are now receiving grants from the US Department of Veterans Affairs.

Sheila Khatri, a member of the Commission on South Asian Affairs, explained that Charlotte Hall State Veterans Home, the only veterans home in the State of Maryland, is a 454-bed facility providing a continuum of care from the 168-bed Assisting Living unit to a higher level of care in the 286-bed skilled nursing home.  Specialized care, for those suffering from Alzheimer and other related dementias, is provided in two 42-bed secured units.  The Home welcomes all Veterans. More information can be obtained from www.charhall.com, or from Carole Lewis, Director of Marketing, at (301) 884-8171.

Secretary Chow has an illustrious background related to his military experience, beginning with service in the US Army Reserve, 1956-1960. Upon graduating from Seattle University, he was commissioned as Second Lieutenant and served in the US Army, 1962-1967, in Germany and also in Vietnam, awarded the Bronze Star, and completed his military service with the rank of Captain. Subsequently, in 1993, he began a position with the US Department of Veterans Affairs from which he retired as a Deputy Assistant Secretary in 2001. Secretary Chow has served at the national and local levels of various veterans organizations, such as National Vice-President, Vietnam Veterans of America, 2001-2105, and is a life member of the Japanese American Veterans Association.

Also, President Gerald Yamada’s report included a summary of JAVA’s 2013 activities which showed advancement in operations and expansion of membership.