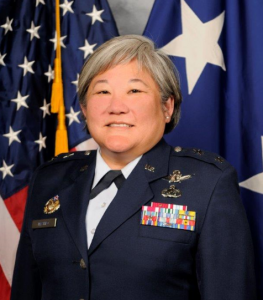 Chantilly, Virginia — In an impressive retirement ceremony officiated by the Director of National Intelligence, James R. Clapper Jr., Major General Susan K. Mashiko was honored for contributions she made to the U.S. Air Force and the Intelligence Community during her 34-year career. The ceremony was held on July 25, 2014, at the National Reconnaissance Office (NRO) in Chantilly, Virginia. Hundreds of General Mashiko’s colleagues filled the NRO auditorium to give the former Deputy Director of NRO a memorable sendoff. Former Secretary of Transportation/former Secretary of Commerce Norman Mineta, who sponsored General Mashiko to attend the U.S. Air Force Academy, beamed with pride during the ceremony.

General Mashiko was awarded the National Intelligence Distinguished Service Medal “for her tireless support to the intelligence Community during a period of unprecedented challenges” and the Defense Superior Service Medal for 34 years of meritorious service. She also received a White House Certificate of Appreciation “for devotion to duty and a spirit of sacrifice in keeping with the proudest tradition of the military service,” and a personal letter from President Barack Obama that highlighted the general’s patriotic devotion to duty in times of peace and war as inspiring and that this devotion spoke volumes about her commitment to serving her country. These awards join a long list of the General Mashiko’s awards including the Legion of Merit and the John J. Welch Award for Excellence in Acquisition Management.

In her remarks, Maj Gen Mashiko, who was born in Glendale, California, and who received her bachelor’s degree in aeronautical engineering, said she decided “to remain on active duty for as long as she found her assignments challenging.” She went on to say she never encountered a boring day. She was thrilled to receive projects that senior analysts judged were impossible to achieve.

General Mashiko expressed appreciation to the people who helped her during her career. General Mashiko held a variety of space and acquisition assignments. She received a Master of Science degree in National Resource Strategy from the Industrial College of the Armed Forces and a Master of Science degree in electrical engineering from the Air Force Institute of Technology.