Falls Church, Virginia. Major General Susan Mashiko, USAF, Deputy Director, National Reconnaissance Office (NRO) in Chantilly, VA, told JAVA members of the role played by the NRO in the Washington intelligence community. General Mashiko, the only Japanese American woman of general rank, was the keynote speaker at the JAVA quarterly luncheon on June 15, 2013 at the Harvest Moon Restaurant, Falls Church, Virginia. She was nominated for the United States Air Force Academy by then Congressman Norman Mineta in 1976. She graduated from the Academy in 1980 and made history as she was in the first class of women to graduate from the U.S. Service Academies. 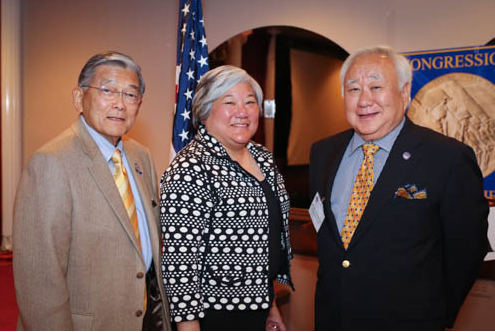 General Mashiko provided an overview of the history and mission of the NRO. She briefly stepped through the history of overhead reconnaissance from the use of aircraft, such as the B-47 bomber, to the first photo reconnaissance satellite program, Corona. She provided an insight into the original organizational structure of the NRO and how those different organizations competed against each other to come up with the best design and program to meet national security needs. The competition was seen as good for innovation.

As many of us do not understand the role of the NRO, General Mashiko highlighted how the organization not only acquires and launches the satellites, but operates the satellites. She compared the NRO to the Air Force Space Command. NRO also has one of the largest information technology networks in the government. This was an area that many Americans were unaware.

Unlike the Air Force Space Command, the NRO is comprised of members of the various Armed Services, the Central Intelligence Agency, and Department of Defense civilian personnel. General Mashiko described her position as a dual responsibility. Not only is she the Deputy Director, NRO, she is also the Commander of the Air Force Element where she manages all Air Force personnel and resources assigned to the NRO.

General Mashiko highlighted the upcoming challenges for the NRO. First and foremost are the nation’s budget problems. Right now, the NRO is able to meet the challenges but further budget constraints will force the NRO leadership to make difficult choices and tradeoffs. On the current threats of government furloughs, she talked of the time spent by the top NRO leadership to come up with a workable plan.

General Mashiko expressed her thanks to the families sponsoring the JAVA scholarships provided annually to promising students with ties to JAVA members. She truly believed that the youth are our future and these scholarships are a great investment. General Mashiko hoped that they might be used for STEM [Science, Technology, Engineering, and Mathematics] related studies.

She recalled an event from early in her career as a Captain stationed at Los Angeles Air Force Base. Then Capt Mashiko picked up a phone call and the Colonel on the other end was in Washington DC. He proceeded to congratulate her on becoming a program manager. She assumed that was a practical joke as only majors and above were selected as program managers and hung up on the colonel. After the second phone call and subsequent hang up, her colonel walked into the office. When the phone rang this time, the colonel picked up the phone and pushed it to her ear and ordered her to listen fully to the phone call. The colonel was serious.

Unbeknownst to her, she was appointed to a program that another organization had said could not be done. After determining the resources needed and putting the program together, she proceeded to actually solve the problem. The moral of the story was that motivation, education, and the challenge helped solve a difficult, if not impossible, problem. She hoped that one of the scholarship winners might be in a similar situation.

She concluded her presentation by thanking former Secretary of Transportation and former Congressman Norman Mineta. Secretary Mineta, then a freshman Congressman from San Jose, had the opportunity to nominate General Mashiko to the first class with women to the Air Force Academy. She thanked him for the opportunity and the support he provided while at the Academy and during her career. In conclusion, she also thanked the Nisei veterans of JAVA. She acknowledged their sacrifices and trailblazing which paved the way for her generation.