Ridgetop, Tennessee. On July 9, 2013, World War II veteran Forde Callis of Ridgetop, Tennessee, was awarded the Knight in the Order of the Legion of Honor (Chevaliere de la Legion d’Honneur) medal by the French Consul General at the Lowe’s Vanderbilt Plaza Hotel in Nashville. Callis received this prestigious award for participating in the Liberation of France while serving with the 141st (Alamo) Regiment of the 36th (Texas) Infantry Division. Callis participated in the 36th Division’s destruction of the German fortress situated in the Vosges forests of northeastern France, the last stronghold designed to protect the German homeland from allied invasion. 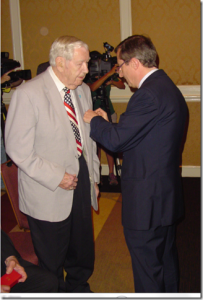 Callis, a member of 36th Division Association and a life member of the Japanese American Veterans Association (JAVA), was an infantryman in the battalion of the 141st Regiment that became surrounded by German forces in the Vosges forests, located in northeastern France. After attempts by sister battalions to break free Callis’ battalion failed in the face of stubborn German army resistance, his battalion was finally rescued by the heroic efforts of the 442nd Regimental Combat Team, the Japanese-American combat unit which had just arrived from fighting in Italy. On October 30, 1944, after sustaining tremendous casualties, the 442nd broke through the iron German ring and saved the remaining 211 men of the trapped battalion. The captured German commander said later that Hitler had personally ordered “take no prisoners, kill them all.” These men of the 141st Regiment, without any rest or celebration following their rescue, were ordered to pursue the retreating Germans. Callis was wounded before his regiment reached the German Rhineland.

Over 67 years later, when the US Senate considered the bill to award the Congressional Gold Medal (CGM) to the World War II Nisei units, Callis made repeated appeals to the two Tennessee senators to approve the Bill. On November 2, 2011, the US Congress awarded the CGM to the three Japanese American combat units: the 100th Battalion, the 442nd Regimental Combat Team, and the Military Intelligence Service (MIS).

The Legion of Honor that was bestowed upon Callis was established in France in 1802 by Napoleon and was created to honor extraordinary contributions to France. The Legion of Honor is one of France’s highest distinctions. The award is not made posthumously.

Critieria are strict for the award. Any living veteran of all the different branches of service must have fought in at least one of the four main campaigns of the Liberation of France: Normandy, Provence, Ardennes or Northern France. Actions having taken place in Belgium, Germany, Italy, or any other neighboring European country do not qualify a candidate for the award.

Callis said that while he was overseas fighting, his wife “was a Rosie the Riveter on B29’s back in Tennessee. She actually earned enough money to buy a small cottage there in Ridgetop”. So when he got home after the war, his wife “really had made me a home there in Tennessee.”