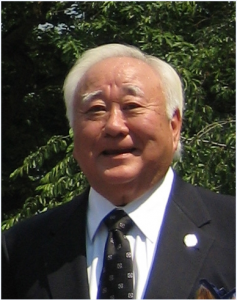 Falls Church, Virginia. Gerald Yamada, President of the Japanese American Veterans Association, addressed the Greater Falls Church Veterans Council on October 13, 2013, on the topic “Why Serve?” In his presentation, Yamada asked “if you were a young Japanese American, around the age of 20, sitting in one of America’s ‘concentration’ camps [during World War II], behind barbed wire, surrounded by armed guards, with your family’s worldly possessions either sold for pennies on the dollar or left behind, with your constitutional rights suppressed by the government, labeled an enemy alien, and your loyalty questioned — would you volunteer to fight for America in a segregated combat unit? You would ask yourself — Why serve?”

In analyzing this question, Yamada compared those who volunteered for service and those who refused to volunteer or to serve when drafted. He pointed out how the valor of the Nisei soldiers showed that they were loyal to America and how their accomplishments also made life better for their parents and future generations of Japanese Americans. Yamada said that if young men and women were to ask him today “why serve?” his advice would be very simple, “I am sure that all veterans would agree with my answer that if you serve, you bring honor to yourself, your family, the community, and the military. You affirm your faith in, and loyalty to, America by putting country first, as did the Nisei soldiers who served during World War II.”

Yamada concluded by noting that the Japanese American experience has an important lesson for the American public. He said that “Executive Order 9066 is a harsh example of racial profiling by the government. In fighting to prove their loyalty, the Nisei soldiers showed us that we must continue to fight against racially motivated government policies.” Yamada believes that this advice can be taken from President Harry Truman, when he declared in the White House ceremony for the returning 100th/442nd soldiers, “You fought not only the enemy, but you fought prejudice – and you won.” The President went on to say, “Keep up that fight and we will continue to win….” Yamada concluded by urging “all of you to enlist in the fight against prejudice. We must keep up that fight and with your help we will continue to win.”

The full text of Yamada’s speech can be found at the JAVA website.