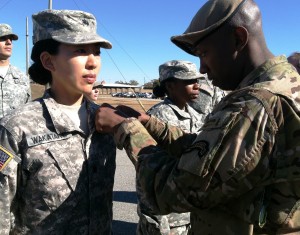 Military lawyers are assigned to all Army units. Some units, such as the 82nd Airborne Division, require Soldiers to be Airborne qualified before they can be assigned to the unit. Other units do not require airborne qualification, but when lawyers earn Airborne wings, they demonstrate that they are willing to go through the same training as the Soldiers they support. 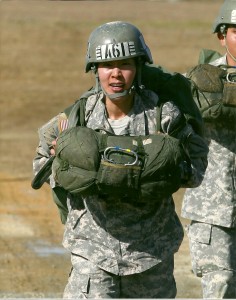 Lt. Col. Kay Wakatake returns to the assembly area after completing her first airborne jump on Nov. 24, 2014. (Photo by 5jump)

As one of the most senior ranking officers in the course, Lt. Col. Wakatake was extremely proud of her accomplishment at this stage of her career. She said, “Although I am twice as old as most of the other students, I was confident that I could handle the physical fitness requirements. It was the exit from the plane and the landing that concerned me the most! Fortunately, I was scared enough to pay close attention during the fine training I received, and that paid off.”