WASHINGTON, DC — The Japanese American Veterans Association (JAVA) honored Terry Shima for his nearly 70 years of selfless service to the United States and advancing the cause of Americans of Asian descent, especially Americans of Japanese ancestry at a luncheon on July 25, on the occasion of his retirement as Executive Director of the JAVA. 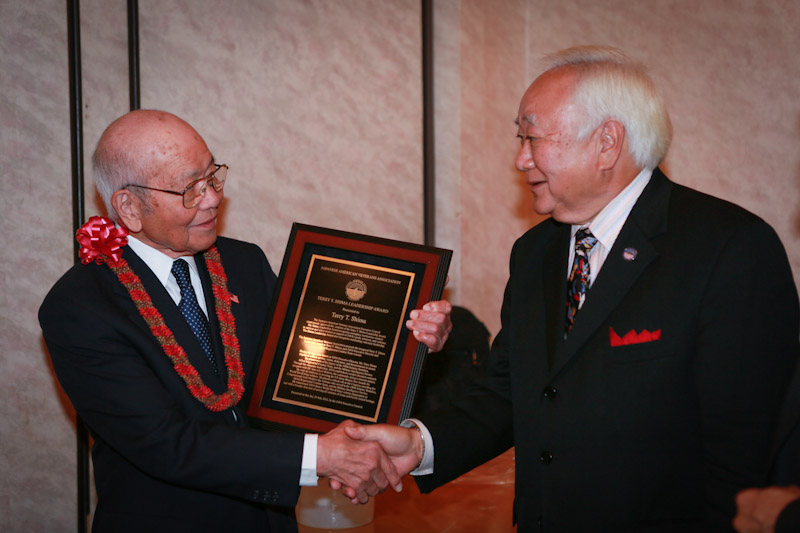 JAVA Honorary Chair, Senator Daniel Inouye, President Pro Tempore and Medal of Honor recipient, spoke of his longtime friendship with Terry and lauded him for his years of service since World War II. Senator Inouye said, “Although JAVA will miss his day to day leadership, his impact will be seen for years to come.”

In addition to Senator Inouye, Ambassador Extraordinary and Plenipotentiary of Japan to the United States of America, the Honorable Ichiro Fujisaki joined Gerald Yamada, JAVA’s President in praising Mr. Shima.

Ambassador Fujisaki reminisced about his first trip to the United States 50 years ago and spoke fondly of his experience then, but what has really stuck with him was the response from the United States following the tsunami that struck last year. He said, “Terry was responsible for coordinating much of the response and I thank him for his lifelong work in linking the two societies.”

Mr. Yamada highlighted Terry’s numerous lasting accomplishments beginning with his service in WWII, his years in the State Department, and his unprecedented eight years as the Executive Director of JAVA. He credited Terry with securing Bronze Star Medals for WW II Nisei soldiers, and Terry’s unrelenting efforts that led Congress to award the highest civilian award in the United States, the Congressional Gold Medal, to WWII veterans of the 100th Infantry Battalion, 442nd Regimental Combat Team, and the Military Intelligence Service.

Mr. Shima was instrumental in initiating the education outreach program within the Washington Metropolitan Area school districts. That effort has gained national attention and has bridged the WWII generation with the young students of today. Yamada garnered a laugh when he pointed out that, “Terry has agreed to chair our newly created Education and Outreach Committee. That’s great news…don’t tell Terry, but everything JAVA does is education and outreach!”

Mr. Yamada announced, “To honor Terry, JAVA will award the Terry Shima Leadership Award annually in recognition of ‘outstanding visionary leadership’ and ‘exemplary meritorious conduct in service and achievements in support of JAVA’s goals, missions, and veterans.'” Additionally, Yamada announced the introduction of the JAVA Dedicated Service pin. Terry is the first recipient of both awards.

JAVA is a fraternal, patriotic, educational and historical organization with the purposes of preserving and strengthening comradeship among its members, perpetuating the memory and history of our departed comrades, maintaining true allegiance to the Government of the United States of America, upholding its Constitution and Laws, and maintaining and extending the institutions of American freedom, and independently and in concert with other veterans organizations, striving to obtain for veterans, reservists, active duty military personnel and their families full benefit of their rightful entitlements as veterans.

The Japanese American Veterans’ Association, Inc. (JAVA), a non-profit Section 501(c) 19 veterans’ organization, was incorporated in 1992 under the laws of the State of Maryland.