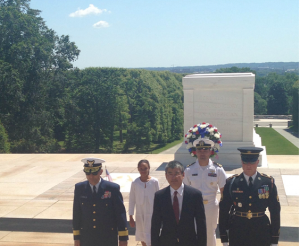 Ms. Padgett described her views of Memorial Day. She said, “Many people will spend Memorial Day by visiting this cemetery, hosting family gatherings and participating in parades. I have the privilege to be here with you to remember and honor those who died while serving in the military for our protection, and freedom. She further explained what made her proud on Memorial Day, “It is their service, commitment and sacrifice for something considered to be a greater cause.”

Admiral Vojvodich, the keynote speaker, provided an insightful reminder of the true meaning of Memorial Day. He said “Memorial Day is among our nation’s most important and solemn holidays…it is a day for Americans of all ages and all backgrounds to come together and honor those who have sacrificed in service to our country.” He discussed the need to honor the past and “fulfill an obligation we have to the fallen.” He said the brave men who have fallen remind those who are serving of the significance of the oath they have taken to defend their nation. 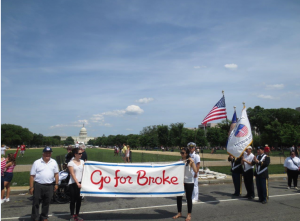 Following the program, Mr. Turner Kobayashi, whose family has arranged this program for the past 66 years, organized teams to lay flowers at the grave sites of 77 Japanese Americans who are interred at Arlington. This was followed by the laying of the wreath at the Tomb of the Unknown by Admiral Vojvodich, Mr. Vincent Matsui, Ms. Padgett and Lieutenant Osuga.

Under the supervision of Lieutenant Colonel Marty Herbert, USA (Ret), chair of the JAVA Memorial Day Parade, JAVA participated in the 10th annual National Memorial Day Parade on May 26, 2014, led by JAVA President Gerald Yamada. It was estimated some 200,000 observers lined Constitution Avenue to pay respects for our nation’s fallen and remember their sacrifices. JAVA once again was well represented , including two color bearers in full dress military uniform. The JAVA contingent consisted of both veterans and family members, many of whom participated in their first Memorial Day parade march. Dr. Ray Murakami drove his customary van for those who preferred to ride as well as Jaime Steve, who drove his World War II vintage jeep with JAVA members riding along.

At 3:00 p.m., the parade halted for three minutes to pay respects to the nation’s fallen heroes. JAVA has participated each year since the inception of the American Veterans Center’s National Memorial Day Parade ten years ago, in part as a tribute to the 442nd Regimental Combat Team. When the 442nd returned from Europe, it marched down the same Constitution Avenue on July 15, 1946, from the US Capitol to the Ellipse, where it was greeted and reviewed by President Harry Truman, who then awarded the regiment with its seventh Distinguished Unit Citation.