Falls Church, Virginia. The Japanese American Veterans Association (JAVA) Quarterly Lunch on July 12, 2014, held at the Harvest Moon Restaurant at Falls Church, Virginia, which was attended by Ms. Irene Hirano Inouye, President of the US-Japan Council, and Brigadier General Creighton Abrams, Jr., US Army (Ret), Executive Director of the Army Historical Foundation, featured the annual Scholarship awards ceremony, the presentation of Service Pin for exceptional service to Dr. Sue Okubo, and remarks by the honored guests and JAVA President Gerald Yamada. Okubo was honored for her roles in the Scholarship Committee and the Oral History Project.

Wade Ishimoto, Chair of the Scholarship Committee, announced the names of the scholarships and the winners as follows:

Ishimoto narrated a slide show prepared by Lieutenant Colonel Michael Yaguchi, US Air Force (Ret), featuring the nine winners along with a short excerpt from their respective essays. 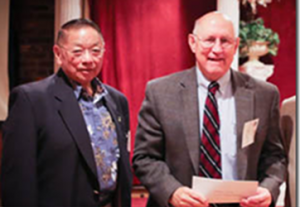 Yamada congratulated the scholarship winners and thanked the scholarship sponsors and scholarship committee. He introduced new members of the JAVA Executive Committee as Captain (Dr.) Cynthia Macri, US Navy (Ret), Lieutenant Colonel Brett Egusa, USAR, and Lieutenant Colonel Rodney Azama, USA (Ret); Bill Houston, Esq., as Acting General Counsel; Mr. Tom Phan and Dr. Jill Czarnecki as co-editors of the quarterly Advocate; and Mr. Terry Shima as Chair of the Awards Committee. Yamada said the US Army is building a new national museum to preserve the 500 year history of the Army but needs help with raising funds. In appreciation of the Army’s recognition of the loyalty of Japanese American soldiers during World War II, Yamada presented a JAVA check in the amount of $20,000 to General Abrams, for the museum building fund. “This donation is given by JAVA in honor of the Nisei Soldiers who served during World War II in the 100th Infantry Battalion, 442nd Regimental Combat Team, and Military Intelligence Service. Last year, JAVA donated $5,000 for the same purpose. These two donations are expected to have JAVA, the 100th Infantry Battalion, 442nd Regimental Combat Team (RCT), and Military Intelligence Service (MIS) placed on the Museum’s donor wall when it is completed,” Yamada said.

Yamada invited the 100th, 442nd and MIS members and families to donate artifacts which will be displayed in the Museum’s permanent exhibit. “Display space at the Museum will be very competitive. This is a short window of opportunity to secure a permanent exhibit for the Nisei soldiers,” Yamada said. A helmet or helmet liner with the Red Bull painted on its side is reportedly an item in high demand. Donors are asked to please contact Yamada directly by email or phone (cyamada@goingforwardstrategies.com; 703-938-3074). 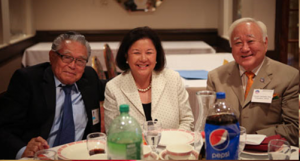 Yamada commended Dr. Ray Murakami, immediate past chair of the Scholarship Committee, for establishing the Senator Daniel Inouye Memorial Scholarship and thanked Ms. Irene Hirano Inouye for her efforts in launching this award. Yamada noted that Ms. Inouye was the first President and Executive Director of the Japanese American National Museum. She nurtured the Museum from a mere idea to the building of the modern structure that is the centerpiece of Little Tokyo in Los Angeles. She is currently the President of the US-Japan Council, which is focused on strengthening relationships between the United States and Japan and with which JAVA is a partner. Senator Inouye was Honorary Chair of JAVA since its inception in 1993. Ms. Inouye, in her response, congratulated the scholarship winners and thanked all JAVA members and families across America for this recognition and discussed the challenges and potential rewards that lie ahead in US-Japan relations. She then mingled freely with JAVA members and guests much to their delight.