Camarillo, California. Ben Kuroki, legendary aerial gunner during World War II and JAVA Life Member, passed away on September 1, 2015, in Camarillo, California. He was 98. Kuroki was the first Nisei to enlist in the US Armed Forces during the war and was the only Nisei to serve as aerial gunner in the Asia Pacific Theater of the five Nisei aerial gunners during WW II. Kuroki flew bombing runs in Northwest Europe, Northwest Africa, East Mediterranean (Balkans), and Central Pacific. He received three Distinguished Flying Cross medals, the second highest medal for heroism in air combat, for flying 25 combat missions against Germany, the Ploesti air raid, and 28 missions in the Pacific. When he was asked for his reaction to serve in the Army Air Corps, which institutionally wanted to keep the Nisei out, Kuroki said, “I had to fight like hell for the right to fight for my own country.” 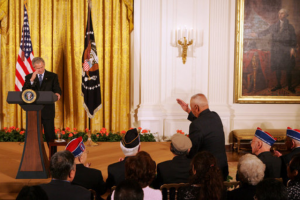 President George Bush returning Ben Kuroki’s salute on May 1, 2008 in the East Room of the White House. When the President extolled Kuroki’s patriotism and heroism in aerial combat in Europe and the Pacific, Kuroki stood and offered his hand salute. Kuroki, 442nd and MIS veterans, seated front row and center, were invited as special guests. The President also recognized the 442nd and MIS veterans for their courage in combat in Europe and the Pacific, respectively. The occasion was the celebration of Asia Pacific Americans Heritage Month. White House photo.

Kuroki was born in Gaithersburg, Nebraska, of immigrant Japanese farmers and raised in Hershey, Nebraska, near North Platte. He learned of Japan’s attack of Pearl Harbor at the JACL meeting held at North Platte, when two men in business suits entered the meeting hall, whispered to Mike Masaoka, National JACL Secretary, who was chairing the organizational meeting, and took him away. When Kuroki returned home, his immigrant father told Ben and his brother Fred “this is your country, go ahead and fight for it.” Ben and Fred immediately went to the closest recruiting office at North Platte, signed up, received their physicals and waited to be called. They waited, but were never called and were told to go home. About two weeks later Kuroki heard on the radio that the Army Air Corps recruiting station at Grand Island was seeking recruits. He telephoned the recruiter to ask if race was a disqualifier. The response was “Hell no, I get two bucks for every recruit, so c’mon on down.” In January 1942, Ben and Fred drove 150 miles to North Platte, signed up, and were told to report to Sheppard Field, Texas for clerical training followed by assignment to the 93rd Bomber Group at Barksdale, Louisiana, where the Group was being formed. The recruiter was apparently unaware that on January 5, 1942 the government had placed a ban on Nisei enlistments by classifying them 4-C (Alien not currently liable for military service).

Kuroki, who trained as a clerk and sensing that the Corps was trying to expel him, kept a low profile and did everything assigned him, including continuous days of KP duty. While the 93rd was being moved to Fort Myers, Florida, the last post before shipment to England, Kuroki successfully resisted another effort to get him transferred. When the 93rd was being readied for deployment to England, Kuroki discovered his name was not on the roster to go. He pleaded with the Squadron Adjutant, Lieutenant Charles Brannan, who placed Kuroki’s name on the roster. He went to England as a clerk, but he aspired to be a gunner. The early bombing missions sustained huge casualties. The operational life of an aerial gunner was 10 missions and there was a short supply of gunners. Kuroki applied for the job, was approved, and was sent to a two-week British gunnery school which did not fire a shot. Kuroki received on the job training and made his maiden flight on December 13, 1942.

Ben’s flight crew protected Kuroki from sneers and abuse by fellow Americans in the Corps. Kuroki was pleased to be fighting the enemy and no longer fighting to stay in the Corps. After his 25th mission, which qualified him to rotate back to the US, Kuroki volunteered for five more missions, including the raid of Ploesti, located 45 miles north of Bucharest, Rumania, Germany’s oil refinery on August 1, 1943. On his 30th mission over Munster, Germany, German flak hit Kuroki’s plexiglass turret and he was nearly killed. Following this mission in early 1944, Kuroki was sent to California, the Corps rest center, one of the first ethnic Japanese allowed to be in Pacific war zone. The Army used Ben to visit internment camps to persuade Nisei to join the 442nd Regimental Combat Team that was being formed. He was also assigned to speak to the Commonwealth Club in San Francisco on February 4, 1944. Prior to this date local newspapers and radios carried critical stories with such headlines as “Jap to Address S.F. Club.” Kuroki visualized a hostile audience and an equally hostile press and asked his Army escort if he could cancel his participation in the event. The escort said it was too late.

When Kuroki saw the audience of 700, the elite of the intellectual and business of northern California, in the elegant meeting hall which has hosted every president since Abraham Lincoln, he was so nervous his knees buckled. He recalled that he felt he would have preferred to be on a bombing mission. The audience listened intently, interrupted Kuroki countless times with applause, had him return to the podium twice, and in the end, gave him a 10 minute standing ovation. Kuroki spoke of racial intolerance, his experience in trying to stay in the Corps, and patriotism. He told the audience he wanted to get in combat in the worst way to prove his loyalty. “When you live with men under combat conditions for 15 months, you begin to understand what equality, brotherhood, tolerance and unselfishness really mean.” His speech was carried over the radio and the press, including the Hearst newspapers, which praised Kuroki. Kuroki realized the impact of his speech when he received a letter from the Club doyen, Monroe Deutsch, Vice President of the University of California at Berkeley, who said Kuroki’s remarks made a huge difference in tempering anti-Japanese American sentiment.

Following his missions against Germany, Kuroki decided to serve in the Asia Pacific theater. However, there was a ban on Japanese American serving in the air. His requests through military channels were repeatedly denied. When some leaders of the Commonwealth Club heard of Kuroki’s difficulties, they sent telegrams to the War Department. Secretary of War Stimson waived the ban for Kuroki, saying in a November 16, 1944, letter to Deutsch “… by reason of his splendid record, it has been decided to except Sergeant Kuroki from the provisions of the policy to which I earlier referred … ”

Federal agents twice attempted to prevent Kuroki from going to the Pacific with the 48th Squadron, 505th Bombardment Group, 20th US Army Air Corps. First at Kearney Air Base in Nebraska, and then at Mather Field, California, armed federal agents demanded the pilot, Lieutenant Jim Jenkins, delay his flight. Jenkins recognized the attempted delay as harassment, ignored the request, started the B-29 Superfortress engines, and took off for the Pacific. Kuroki’s crew members provided him protection and support. When walking to the mess hall, he was positioned in the center of the crew members. Kuroki said he felt safer on flying missions than being on the ground. Their base was Tinian Island, where their plane was co-located with Enola Gay, which was carrying the A-Bomb. Kuroki flew 28 missions in Asia, most of them bombing targets in Japan. After completing his last flight, a drunken GI called Kuroki a “dirty Jap” which triggered retaliation by Kuroki. The GI wielded a knife that cut Kuroki’s head that landed him in the hospital for a few days. After his return, Kuroki embarked on his 59th mission to fight racism, prejudice and discrimination. He spoke to civic group and to schools. He was invited to the New York Herald Tribune annual forum, which was attended by many dignitaries. Kuroki was given a seat between General Stilwell and General Marshall.

Following his discharge, Kuroki got married and attended the University of Nebraska, where he majored in journalism. After he graduated, he published a newspaper and later worked as editor for newspapers in Michigan and, finally, in California where he retired in 1984 as the news editor of Ventura Star-Free Press. In 2005 Kuroki was awarded the Distinguished Service Medal (DSM) for his combat and speaking roles; the Nebraska Press Association presented its highest honor, the “President’s Award;” the University of Nebraska conferred an honorary doctorate, and he was the subject of a Public Broadcasting Service (PBS) documentary, The Most Honorable Son: Ben Kuroki’s Amazing War Story.” In 2006, Kuroki was invited to the White House twice, once to attend the dinner for Japan Prime Minister Junichiro Koizumi. The other was to attend the Asia Pacific Heritage Month Program, when President George Bush recognized him for his air combat role and his fight against racism on the home front. Kuroki was particularly proud to receive the 2010 American Veterans Center Audie Murphy Award because this linked him with the members of the famed Japanese American 442nd Regimental Combat Team.

Kuroki took his golf seriously. Well into his 90’s he walked the 18 holes. He also enjoyed taking his grandchildren trout fishing.

Kuroki is survived by his wife, Shige, of Tyhee, located 6 miles from Pocatello, Idaho, daughters, Kerry (Williams), Kristyn, and Julie, 4 grandchildren and one great grandchild.

The Kuroki family appreciates the affection of Ben’s many colleagues and friends and requests that in lieu of flowers tax-exempt donations be made to the Ben Kuroki Scholarship Fund, Japanese American Veterans Association, 9455 Park Hunt Court, Springfield, VA 22153.