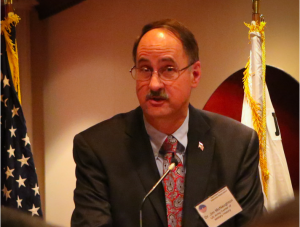 Falls Church, Virginia. The Japanese American Veterans Association (JAVA) held its quarterly luncheon at the Harvest Moon Restaurant in Falls Church, VA, on January 17, 2015. Dr. James McNaughton, a noted author and currently a student at the U.S. Army War College in Carlisle, PA, was the guest speaker. Dr. McNaughton, who is also a JAVA member, spoke of the legacy of the Military Intelligence Service, or MIS, as it applies to world affairs today and the importance of applying those lessons learned through the MIS to our national security strategy.

During the luncheon, JAVA’s Courage, Honor, and Patriotism Award was presented to the Honorable Ed Chow, Secretary of Maryland’s Department of Veterans Affairs, for his long standing support of veterans in many capacities that he has held. Secretary Chow was recognized for his helping to preserve the legacy of the US Army’s famous 100th Infantry Battalion, the 442nd Regimental Combat Team, and the Military Intelligence Service. Chow’s tenure ended in January 2015 with the change of administration. 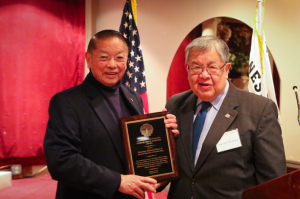 Special guests included Lucy Ostrander and Don Sellers, both film producers from Washington state, who have created a number of documentaries on the Japanese American experience. One of their noted films focused on Roy Matsumoto, an MIS member who served with Merrill’s Marauders commanded by Brigadier General Frank Merrill in Burma during World War II. They are currently working on another documentary featuring the life of Kazuo Yamane, another MIS veteran.

JAVA President Wade Ishimoto presented a special Combating Terrorism commemorative coin to the Honorable Norman Mineta (former Secretary of Transportation and Secretary of Commerce), Major General Joseph Caravalho (Deputy Surgeon General of the US Army), and Brigadier General Paul Nakasone (Deputy Commander, US Army Cyber Command) in recognition of their efforts to stem the tide of terrorism throughout the world.