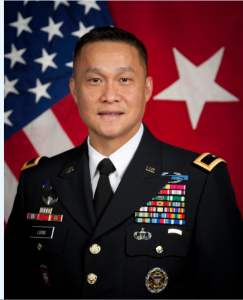 Fort Hood, Texas. Just before the star of an Army Brigadier General was pinned on his uniform in a ceremony on August 6, 2014, at Fort Hood, Texas, Colonel Viet Xuan Luong, the 1st Cavalry Division’s Deputy Commander for Maneuver, remarked to the Army Times, “It’s a personal honor for me to be promoted to the rank of general officer, but I don’t want the promotion to be too much about me. It’s a tribute to my soldiers and [noncommissioned officers], the folks who’ve worked to get me where I am.” The program, attended by Luong’s family, was officiated by Lieutenant General Mark Milley, Commanding General of the III Corps.

Brigadier General Luong, a political refugee who came to America in 1975 at the age of nine, is the first Vietnamese American to achieve flag rank and becomes the 117th Asian Pacific American promoted to this status. Luong and his family which included eight siblings left their home in Saigon (now Ho Chi Minh City) on April 29, 1975, one day before the city fell. 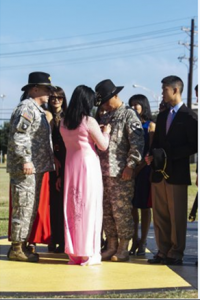 Luong also told the Army Times that “he is grateful for the opportunities granted to him as a U.S. citizen. … It’s a testament to what this nation stands for, and her ideals, and the opportunities my family has gotten”. … The family’s experience has made him and his sisters “very patriotic. … As a transplanted American, or an immigrant coming from a different country, there’s no sense of entitlement as far as earning that citizenship, and working hard to contribute to our nation. … There’s a sense of service, for me, to be able to give back to our nation for all the opportunities it’s given us, saving us from harm’s way, but also the opportunity to assimilate and move up through education.”

The major portion of his 27 years of service has been in command of troops both within the United States and overseas. “Those were the most challenging times for me,” he said. “I’ve lost so many soldiers, and that has always been part of what the future has in store for me, in trying to really get people to understand that freedom comes at a pretty high price. For us who’ve lost troops in combat, it’s very personal,” he told the Army Times.

Following his graduation from University of Southern California, Luong said he aspired to join the military as his career choice largely due to the influence of his role model and father, a South Vietnamese Marine Major. Asked by a reporter of the Japanese American Veterans Association why he selected the armed forces as his career choice, General Luong replied, “I’ve chosen to serve to follow the footsteps of my father, but more importantly, to give back to a country that has given so much to me and my family.”

Later this year, Luong is preparing to return to Afghanistan where the 1st Cavalry Division headquarters is already deployed. [EdNote. JAVA appreciates Army Times permission, obtained on August 14, 2014, to use their quotes.]