Washington, DC. The 100th Battalion, 442nd Infantry, U.S. Army Reserve, plans to participate in two major events during the Memorial Day events in Washington, DC. The first will take place at Arlington National Cemetery (ANC) and the other in the National Memorial Day Parade down Constitution Avenue. On Sunday, May 26, 2013, at the ANC pavilion near the Columbarium, the Japanese American Citizens League, Washington, DC and the Japanese American Veterans Association (JAVA) will jointly (1) conduct their annual program to honor all soldiers of the 100th Battalion, 442nd Regimental Combat Team, and the Military Intelligence Service (MIS) who died in the line of duty during World War II, and (2) place flowers at over 70 of their gravesites. Major General James Huggins, USA, Commanding General of the 82nd Airborne Division and a native of Hawaii, has agreed to be the keynote speaker at the ANC program. 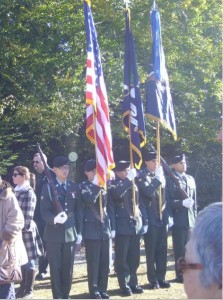 This is the 65th year of continuous memorial service sponsored by JACL WDC and the family of the late Key Kobayashi, a MIS veteran. About 5 years ago, Dr. Craig Uchida, then President of JACL WDC, invited JAVA to participate as joint sponsor. Turner, Key’s son, now heads the Kobayashi family’s arrangement of the annual program.

The second event is on Monday, May 27, the American Veterans Center’s (AVC) 9th national Memorial Day Parade down Constitution Avenue. The parade “is a salute to America’s Veterans and in honor of those who died in defense of our country from the American Revolutionary War to Operation Iraqi Freedom. The parade consists of marching bands from many of the 50 states and veterans units honoring World War I, War World II, the Korean and Vietnam Conflicts, Desert Storm, and the liberation of Grenada, Panama, Iraq and Afghanistan”, the AVC announcement said.
The 100th Battalion, 442nd Infantry color guard will lead the JAVA contingent of marchers and riders in a prominently marked van and a World War II-era jeep, similar to those used in combat in the World War II battle fronts in Europe and the Pacific theaters. “There will be national television coverage and the parade will be syndicated nationwide. Affiliate information will be posted at www.nationalmemorialdayparade.com, and viewers can also check their local listings”, AVC said..

JAVA President Gerald Yamada noted that “the participation of 100th Battalion, 442nd Infantry, colors is significant because on July 15, 1946, the 442nd Regimental Combat Team, including the 100th Battalion soldiers, fresh from the Italian war zone, paraded down Constitution Avenue for the review at the Ellipse by President Harry Truman, the first time ever that a US president reviewed troops of regimental size.” President Truman reaffirmed Nisei loyalty, which was questioned during World War II, and his message resonated across the land supported by editorials in major newspapers.

For the present-day 100th Battalion, 442nd Infantry, the 2013 parade will also mark the culmination of a series of commemorative events spanning over 18 months for the 100th BN, 442nd Infantry Color Guard, which performed in ceremonies on the former battlefields of France; the Congressional Gold Medal ceremony in Washington, D.C.; regional Congressional Gold Medal ceremonies throughout Hawaii and California; and most recently at the late Senator Daniel K. Inouye’s memorial services in Hawaii.

Lieutenant colonel Keith Horikawa, USAR, Commanding Officer of the 100th Battalion, 442nd Infantry, said “when President Truman uttered those famous words to the regiment in 1946 – ’You fought the enemy abroad and prejudice at home and you won’- little did anyone anticipate that the 100thBN. 442nd Infantry would continue to exist 66 years later as one of the most ethnically and culturally diverse combat units in the modern U.S. Army, the epitome of equality and fairness with men and women of every imaginable ethnic, cultural, and religious background in its ranks. Spread across the Pacific with companies in Hawaii, American Samoa, Guam, and Saipan, the 100th Battalion, 442nd Infantry, is a relevant force in today’s army with two overseas combat deployments under its belt and over 800 trained and ready warriors who proudly wear the 442nd torch on their shoulders and live by the words, “Go For Broke.”