In his remarks to open the National WW II Memorial at Washington, DC on April 29, 2004, President George Bush singled out Sakato’s heroism from the 16 million Americans who served during WW II. Bush said Army Private Joe Sakato, “in heavy fighting in France, saw a good friend killed, and charged up a hill, determined to shoot the ones who did it. Private Sakato ran straight into enemy fire, killing 12, wounding 2, capturing 4, and inspiring his whole unit to take the hill and destroy the enemy. Looking back on it 55 years later, Joe Sakato said, “I’m not a hero. Nowadays they call what I did road rage.” This man’s conduct that day gained him the Medal of Honor, one of 464 awarded for actions in WW II,” the President concluded. 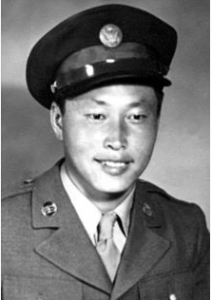 Sakato was born in Colton, California and moved with his family to Arizona to avoid being placed in an internment camp. When enlistments reopened for Nisei in 1943, Sakato volunteered for duty at Glendale, Arizona thinking he was joining the Army Air Corps. While being disappointed about this, he trained at Camp Shelby, Mississippi and was shipped to Italy with the 442nd in June 1944. In September 1944, the 442nd was ordered to move from Italy to the southern front of France to engage the Germans in a two front war. The 442nd was assigned to the 36th (Texas) Division, whose mission was to clear the German fortress in the Vosges forests, where the enemy built a fortress to prevent the Americans from entering the German homeland. History had told the Germans that since the days of the Holy Roman Empire no invading force was able to defeat the force that occupied the Vosges forests. The 442nd’ mission was to neutralize the Vosges forests thereby allowing the Americans to invade Germany.

The 442nd had a two-fold mission in the battle that Sakato was awarded the Medal of Honor. He helped smash the German forces that had trapped a battalion of the 36th (Texas) Division. When the Germans retreated from the Vosges forests on October 30, 1944, 211 Texans walked out and this allowed the 7th Army to pursue the Germans to and across the German border. Sakato’s citation said he “distinguished himself by extraordinary heroism in action on 29 October 1944, on hill 617 in the vicinity of Biffontaine, France. After his platoon had virtually destroyed two enemy defense lines, during which he personally killed five enemy soldiers and captured four, his unit was pinned down by heavy enemy fire. Disregarding the enemy fire, Private Sakato made a one-man rush that encouraged his platoon to charge and destroy the enemy strongpoint. While his platoon was reorganizing, he proved to be the inspiration of his squad in halting a counter-attack on the left flank during which his squad leader was killed. Taking charge of the squad, he continued his relentless tactics, using an enemy rifle and P-38 pistol to stop an organized enemy attack. By continuously ignoring enemy fire, and by his gallant courage and fighting spirit, he turned impending defeat into victory and helped his platoon complete its mission. Private Sakato’s extraordinary heroism and devotion to duty are in keeping with the highest traditions of military service and reflect great credit on him, his unit, and the United States Army.”