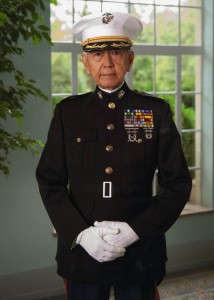 Maj. Kurt Chew-Een Lee, who was cited for bravery during the Korean War. Credit Kevin Allen

As reported on the New York Times website, “Maj. Kurt Chew-Een Lee, a Chinese-American who led Marines into battle against the Chinese in the Korean War and was cited for bravery for helping to preserve a crucial evacuation route for 8,000 American soldiers, was found dead on March 3 at his home in Washington.”