Day of Remembrance at the Smithsonian Museum on February 19, 2014 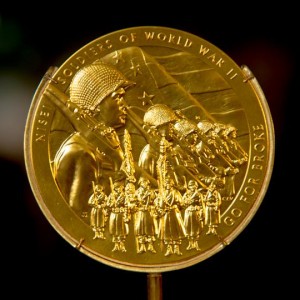 Congressional Gold Medal on display at the Smithsonian National Museum of American History. Photo by Jeff Malet from the Georgetowner.

The Smithsonian National Museum of American History hosted an unveiling ceremony marking the return of the Congressional Gold Medal. The ceremony was held on Wednesday, February 19 at 10 am, on the third floor in the East Wing of the museum. Following the unveiling, CGM Recipient Terry Shima, NJAMF Chairman Dan Matthews, and others participated in a panel moderated by former NJAMF Chairman and former JACL DC Chapter President Craig Uchida in the Warner Brothers Theater. Both events were free and open to the public.

Noriko Sanefuji, from the Smithsonian Institution, offers these select web articles that capture the priceless experience of this occasion: