Seattle, Washington. One hundred twenty Nisei veterans, representing 33,000 Japanese American men and women who served in the armed forces in WW II, were honored on Veterans Day, November 11, 2005, at the University of Washington’s Meany Hall in Seattle, Washington. Over 1,100 ticket holders, including many from across the nation, braved the rain to honor the Nisei, including 814 who were killed in action, and to listen to Senator Daniel K. Inouye’s keynote address. The organizer was Densho, the Japanese American Legacy Project. Prominent military, government, business and community leaders, including Washington State Governor Christine Gregoire, participated in this event.

Mr. Tom Ikeda, Executive Director of Densho, said this event, held 60 years after the end of WW II, will share the experiences of Japanese American veterans so “we will learn to be closer and work together.” Ikeda established Densho in 1996 to document oral histories but it has since expanded its mission “to educate, preserve and inspire action for equality.” In spite of overt prejudice and discrimination culminating in Presidential Order 9066 forcing an evacuation from the West Coast, over 1,000 Japanese Americans volunteered from internment camps for combat with the US Army to prove their loyalty to their country. Ikeda believes that the majority of Americans are unaware of the Japanese American experience during WW II.

The Nisei veterans, including Inouye, wearing their medals, walked together onto the stage. They were accorded a prolonged standing ovation. General Richard B. Meyers, recently retired Chairman of the Joint Chiefs of Staff, said “I can’t imagine being anywhere else than in Seattle with these great men”.

Inouye, a Medal of Honor holder and Honorary Chair of the Japanese American Veterans Association, spoke of his parents leaving Japan to settle in Hawaii, the impact on Issei and Nisei of Japan’s attack of Pearl Harbor, the distrust of Japanese Americans by their government, the response for volunteers from internment camps to serve in the segregated 442nd Regimental Combat Team, the amelioration of the discord between mainland and Hawaii Nisei, and the experience of witnessing discrimination in southern United States. 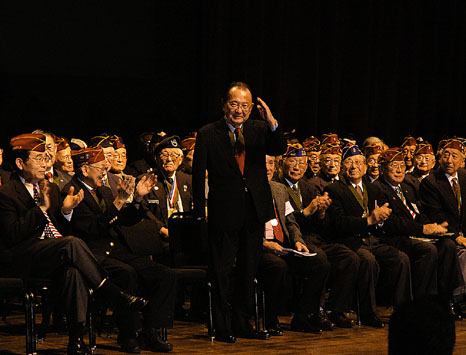 Inouye graphically described the ferocity of combat, the sufferings caused to the civilian population, the human side of the enemy soldier and battle formations. He discussed his final day of combat on April 21, 1945, when he was wounded and required 17 transfusions of blood, provided by soldiers of the African American 92nd Infantry Division, to which the 442nd RCT was attached. “So when the civil rights legislation came up, I believe I was the only African American in the Senate. … Thanks to them, I’m here today, and I’m always grateful to them.” Inouye talked of the discrimination at Oakland, California where he walked into a barbershop in full dress uniform with four rows of ribbons and was told, “We don’t cut Jap hair.”

Inouye said the United States is a great country for admitting its mistakes in the forced evacuation and internment of 120,000 Japanese Americans. He said the monetary compensation of the redress was important, but the acknowledgement of and apology for the mistake demonstrates the greatness of America. “Well, I served in a great country, I’m proud to do so.” Inouye concluded his remarks by thanking all the veterans, not just those of WW II, because “if it weren’t for the veterans, I don’t think this nation would be as great as it is today.”

The full text of Inouye’s powerful speech can be found in www.javadc.org and www.densho.org/tribute. 30