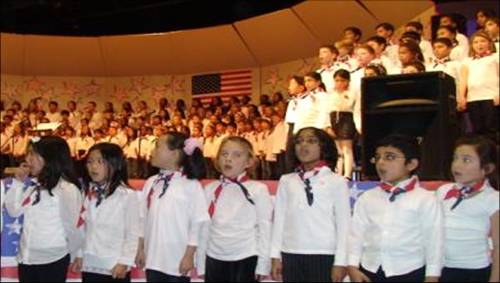 Photo above: Part of 500 students of Spark Matsunaga Elementary School at
Germantown, Maryland, to honor veterans.  Photo by Jeanne Webster.

As the featured speaker, Brigadier General James L. Huggins, USA, an Iraq combat veteran and Director of Operations, Readiness and Mobilization, in the Office of the Deputy Chef of Staff of the Army at the Pentagon, said “I am proud to be a simple soldier in today’s Army.  It is the best Army we have ever had but that it will not be the best forever.  We continue to strive each day to improve in order to meet the challenges of an uncertain future in which nation states and independent actors threaten our way of life.”  He paid high tribute to Japanese Americans who fought in WW II and the Korean War, adding, “you made it clear that the cost of freedom is a very real and solemn bill only paid in blood and sacrifice by the soldiers who answer the call to defend it.”

General Huggins was born in Camp Zama, Japan, and graduated from the Leilehua High School in Wahiawa, Oahu.  He claimed the biggest influence in his life is his mother, who is of Japanese heritage. “Her simple example is what I try to live every day,…her lessons…brought me here."  Being of a bi-racial background, he said he strives to maintain “a balance between two cultures”.

During the morning, a JAVA delegation participated in the National Veterans Day Ceremony at the Arlington Cemetery where Vice President Richard Chaney laid the wreath at the Tomb of the Unknowns and addressed the nation.  President Robert Nakamoto represented JAVA and Lieutenant Colonel Martin Herbert, USA (Ret) and Tommy Phan served as JAVA color bearers.  Chaney said that the American militia has “thrown back tyrants, liberated death camps, carried out heroic rescues, and kept the peace in volatile regions. Above all, they have kept us free in the land we call home -- free to live as we see fit, free to work, and worship, and speak our minds, and choose our own leaders. All of this, we owe to the men and women who have taken that oath to defend America.” 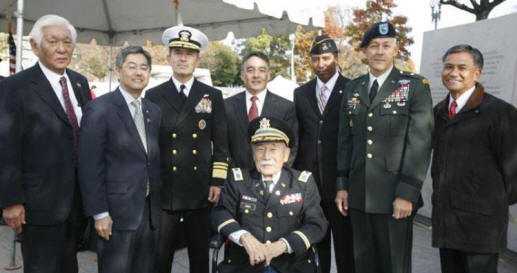 Ben Kuroki (91), JAVA member, who flew 58 air combat missions in B-24 and B-29 bombers in Europe and the Pacific, including Japan, taped his remarks which were aired at an American Legion program in Hershey, Nebraska, on Veterans Day.  JAVA provided speakers for Veterans Day programs at the Masonic Lodge in Rockville, Maryland, the South Lake High School in Virginia, and the Howard County Community College in Columbia, Maryland.  Over 500 students at the Spark Matsunaga Elementary School of Germantown, Maryland stood on the stage singing patriotic songs to honor veterans, including JAVA members.  US Senator Matsunaga won fame for his heroism in the 100th Infantry Battalion, legislative achievements, and promotion of education before his death in 1990.