Tribute was paid to all veterans of the armed forces including the 360,000 Asian Pacific American (APA) veterans and 29,000 APAs on active duty. Medal of Honor recipient Mr.George Joe Sakato of Denver, Colorado and Lt Col Michael Yaguchi, USAF (Ret), Chair of the Veterans Day Committee, laid, at the sound of taps, a floral wreath at the Heroes Wall where the names of over 800 Nisei, who paid the ultimate price in WW II, are inscribed.

Sakato, the principal speaker, said “In our hearts we never doubted our loyalty and love of our country even tough the government put our families in internment camps. … When people ask what the Medal of Honor (MOH) means to me I have to say it is an honor.  But it is an honor I wear for the men who paid the ultimate sacrifice with their lives. … On Veterans Day it is right to remember all those who fought, those who were at home suffering the indignities of the times and especially those who did not return.” 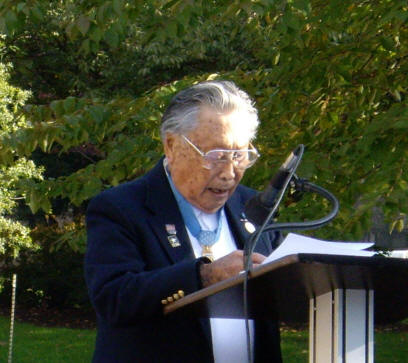 Joe Sakato speaking at the Veterans Day ceremony at the National

Mr.  Sakato was awarded the MOH for his heroism on October 29, 1944 during the fierce battle in the Vosges mountains of eastern France to rescue the 1st BN, 141st Regiment, 36th (Texas) Division, which was trapped by German forces.  His squad leader, his closest friend, was fatally shot.  His unit was pinned down by enemy fire.  Sakato assumed command and, despite heavy enemy fire directed at him, made a one-man charge up the hill. This inspired his unit to follow him.  He used an enemy rifle and P-38 pistol to stop an organized enemy attack.  He killed 12 Germans and wounded two, personally captured four and assisted his platoon in taking 34 prisoners.  By his gallant courage and fighting spirit, he turned impending defeat into victory.

The Pan Pacific American Leaders and Mentors (PPALM) used this occasion to publicly announce its formation as a non profit organization to mentor US Army uniformed and civilian personnel about their career goals and aspirations. 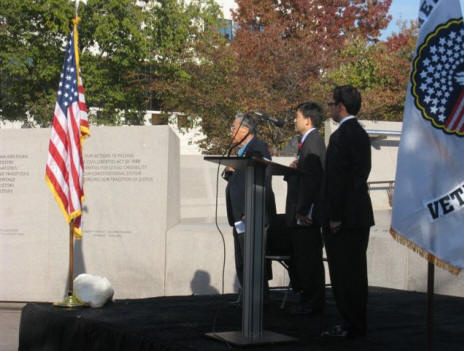