Washington, D.C. Colonel (Ret.) Sunao “Phil” Ishio, founding President of the Japanese American Veterans Association and member of its Executive Council, was elected to the position of Honorary Chair on December 2, 2005 by the unanimous vote of the JAVA Executive Council. He joins Senators Daniel K. Akaka and Daniel K. Inouye and Secretary of Transportation Norman Mineta to this prestigious position. 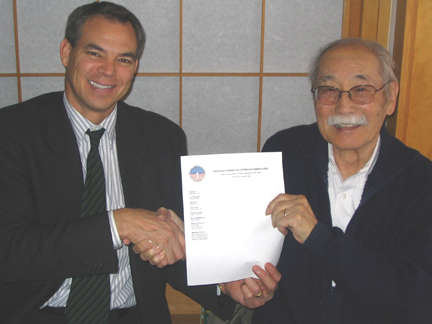 Bert Mizusawa, President of JAVA, praised Ishio’s foresight 13 years ago to activate JAVA and build a viable foundation to launch JAVA as a nationwide veteran's service organization to serve the interests of Japanese American, Asian American and other veterans. Mizusawa noted that JAVA started with a handful of former Military Intelligence Service veterans to an organization serving all veterans from all wars since World War II. The growth in the size and scope of JAVA's charter has significantly increased Japanese American visibility regarding military service to America. We have come a long way, Mizusawa said, and called for the continued support of all of JAVA's members. Mizusawa encouraged younger Asian American veterans to join and get involved.

Expressing how deeply he was moved with this recognition, Colonel Ishio expressed his satisfaction that JAVA, in concert with other veterans organizations, is playing a substantive role to represent the interests of Japanese American, Asian American and other veterans.

Ishio was born in Berkeley, California and grew up in Salt Lake City, Utah. Following his graduation from high school, he attended the University of Utah for one year. He then accompanied his grandparents to Tokyo, where he enrolled in Waseda University. He was popular among his fellow Japanese students who sought to elect him president of his class. As tension between Japan and the United States escalated, Ishio returned to the United States on the advice of the US Embassy.

On October 31, 1941 Ishio was inducted into the US Army and assigned to Camp Roberts, California, for training. When Japan attacked Pearl Harbor, Ishio recalls all Japanese American GIs were assigned to kitchen police duties. In June 1942, Ishio volunteered to serve in the Military Intelligence Service and was assigned to Camp Savage, Minnesota. Being in the first class, Ishio recalls their task was to scrub the campsite so they could move in. Following graduation, Ishio and ten other Nisei were sent to San Francisco prior to shipment to Australia. He was elated to be promoted to Tech Sergeant on board the vessel but was disappointed upon arrival in Australia because General Douglas MacArthur ordered the Nisei downgraded to Corporal because “Tech Sergeant is the grade they should work up to.”

After a brief stay in Australia, Ishio was shipped to Papua New Guinea where his job was to translate captured enemy documents. While Ishio was assigned to the regimental headquarters, traditionally located in the rear, the headquarters frequently became the front lines during intense combat. Looking like the enemy posed obvious dangers for the Nisei, who could be shot by either the Japanese or Americans. Because of this, each Nisei was assigned Caucasian body guards.

Subsequently, in the invasion of Leyte, Philippines in October 1944, Ishio received his battlefield commission. He recalled Japanese aircraft dive-bombed his landing craft that seriously wounded his colleagues. One, Spady Koyama, was considered killed and was placed on the beach with a tarpaulin over his head. A soldier passing by saw Koyama’s arm move. The medics were called and Koyama was evacuated to the States and lives in Seattle today.

When Ishio returned to the States on R&R in March 1945, his first stop was San Francisco, probably the only Japanese American to walk its streets at that time. While on home leave Ishio and Connie Nayematsu of Montana were married. He then proceeded to Camp Ritchie, Maryland, where he worked in a unit of the military intelligence division. The highlight of this assignment was to be called to the White House as a language specialist to brief officials on a captured enemy engineering study, which was the Japanese plan to build a dam at the Sanmen Gorge on the Yellow River in China. He was subsequently assigned to the Washington Document Center, which became a part of the Central Intelligence Agency.

Ishio converted his commission to reserve status and joined the US Army Reserve Unit of CIA, his employer. He eventually became its commander, attended the Command and General Staff School, and was promoted to Colonel. Following his retirement from CIA, Ishio worked for the Drug Enforcement Administration to manage the narcotics and dangerous drug information. He served in this position for 17 years.

Asked what was the most important translation done by Japanese Americans, Ishio said unequivocally it was the “Z Plan”, the Japanese Imperial Navy’s master plan to destroy the US 5th Fleet and thereby maintain control of the Philippine Sea, the Marianas Islands, including Saipan and Guam, and the naval gateway to the Japanese homeland.

The Z-Plan, dated March 8, 1944, fell into US hands by a twist of fate. While transporting the Z-Plan from the Palau to the advance Japanese naval headquarters near British North Borneo, the plane carrying the courier, Admiral Shigeru Fukudome, Chief of Staff of the Imperial Navy Combined Fleet, had to crash land in a rain storm near Cebu, Philippines. Filipino fishermen rescued Fukudome, and also seized the waterproofed satchel that protected the Z-Plan. Through a tested communication channel between the Filipino guerillas and General Douglas MacArthur’s headquarters, the Z-Plan was transported via submarine and airplane to Australia. Translators, including two Nisei, translated the material and had it couriered to Admiral Chester Nimitz at Pearl Harbor, Hawaii. This information was made available to all naval fleet commanders in the Pacific.

When the Japanese Imperial Navy launched its Z-Plan on June 15, 1944 the US naval commanders, armed in advance with its translation, were prepared, thanks in part to the Nisei. In the most ferocious five days of naval battle, the Japanese were defeated, losing over 500 planes, five carriers and other vessels.

When MacArthur announced at the end of the war that “never in history has a military commander gone into battle knowing in advance so much about the enemy,” he was likely reflecting the contributions of the Nisei linguists.

Ishio and his wife, Connie, live in Silver Spring, Maryland. His son resides in Burtonsville, Maryland and his daughters live in San Francisco, California, and Atlanta, Georgia.