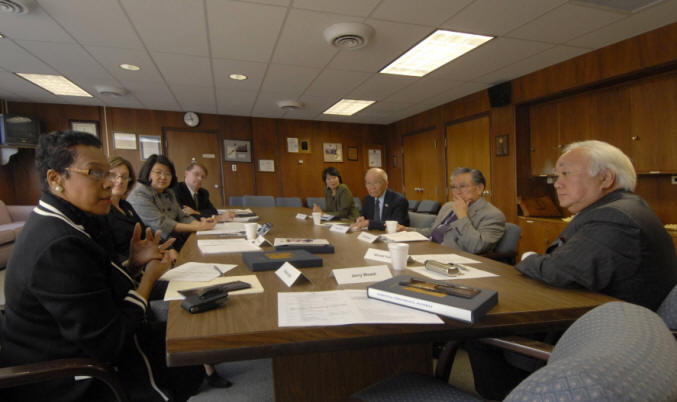 In addition to examining the World War II internment of persons of Japanese ancestry, the program focuses on the 100th Battalion-442nd Regimental Combat Team and other segregated military units, including the Navajo Codetalkers, Tuskegee Airmen, and Latinos who served during WWII.  The one-day teacher training and orientation workshop, scheduled on Feb. 2, 2008 in Rockville, Maryland, will be the first of its kind for teachers on the East Coast. Teachers from other local area schools will also be invited to the workshop, which is viewed as a pilot activity for adoption in other counties, as desired.

Created in 1998 by the GFBNEC in collaboration with curriculum specialists Esther Taira and Mark Elinson, the program received its initial funding from the California Arts Council in support of the State of California social studies curriculum standard and later obtained a grant from U.S. Department of Education, Fund for Improved Education.  More than 1,500 teachers have completed the program to date, reaching an estimated 60,000 students each year.

Dr. Weast, who has a son serving in Iraq, welcomed the partnership with MCPS.    “We are extremely proud of the success achieved by the teacher training workshops in California and feel privileged to be able to join with Dr. Weast and many distinguished organizations in our ongoing efforts especially to bring the values embodied by our veterans into classrooms across the nation,” stated Christine Sato Yamazaki, President and Chief Executive Officer, GFBNEC.

Dr. Frieda Lacey, MCPS Deputy Superintendent, said, “The Japanese American experience in WWII is a story of how adversity can be overcome in a constructive manner and is an important lesson to convey to students.”  In conjunction with the program, Dr. Lacey plans to involve her newly acquired MCPS partners as advisors in the writing of the Japanese American experience in MCPS textbooks.

The program offers printed materials, curriculum guides, videos and WWII veterans as guest speakers and visits to the National Japanese American Memorial to Patriotism, located near the U.S. Capitol Building.  Shima said, “JAVA speakers wish to convey a message of Nisei loyalty, patriotism and the greatness of America, a nation that can admit the mistake of incarcerating Japanese Americans, offer a presidential apology, make corrections and move on as a stronger nation.”  Yamada said a major thrust of the NJAMF endeavor is to invite classes to visit the Japanese American Memorial to Patriotism where students will be briefed of how one minority group overcame tremendous discrimination and prejudice.

“This is a wonderful opportunity to work with such distinguished and accomplished veterans,” said Trementozzi.  “America is losing more and more WW II veterans every day.  We have to pay attention to their stories while we still have them with us,” she reflected.  30