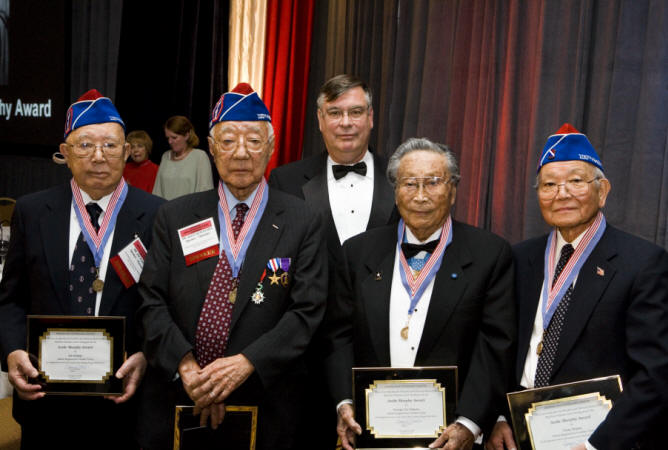 The Audie Murphy Award is presented “for distinguished service in the United States Military during World War II”.  Murphy was the most decorated soldier in WW II.  He fought in nine campaigns and won every medal the Army had to offer including the Medal of Honor, Distinguished Service Cross, two Silver Stars and three Purple Hearts.

The citation read, in part, “The men of the 442nd chose their slogan:  ‘Go For Broke.’ This reference to the ultimate gamble represented exactly what these Japanese Americans were doing.  They were risking it all on one great effort to win big.  Their gamble, however, was to offer their lives to prove their loyalty.  The predecessor to the 442nd was the 100th Infantry Battalion, which fought valiantly through Italy, earning tremendous respect. … For their valor, courage and loyalty to country, all of the men who served in the 100th-442nd Regimental Combat Team are being recognized as the recipients of the American Veterans Center’s 2007 Audie Murphy Award.”

In his acceptance speech, Sakato said “I am proud and honored to accept the Audie Murphy Award on behalf of the 100th Battalion-442nd Regimental Combat Team,  the Nisei soldiers who served in the Military Intelligence units in the Asia Pacific Theater, the men who served in the US Air Corps and the women who served in the Women Army Corps (WAC) and the Nurses Corps. …We enlisted in the armed forces to show our loyalty to our country.  We volunteered from internment camps and from the pineapple and sugar cane fields from Hawaii.  We were proud of our motto:  “Go For Broke”.  In rescuing the Texas Battalion that was trapped by the Germans we lived this motto to the fullest.”

Earlier in the week, on November 8, Sakato, Kuwayama, Ichiuji, Grant Hirabayashi, Merrill’s Marauder and Ranger Hall of Fame inductee and Grant Ichikawa, veteran of the Army’s Military Intelligence Service, participated in a one hour panel discussion at the AVC conference entitled:  “Unparalleled Patriotism:  The Japanese Experience in WW II”.  Approximately 250 packed the meeting hall.  Following this, the veterans moved to an adjoining room where they held a Question and Answer session with some 70 high school students from the Osbourn Park High School in Manassas, Virginia.

The mission of AVC is to preserve and promote the legacy of America’s service men and women.  Comprised of two divisions, the WW II Veterans Committee and National Vietnam Veterans Committee, the AVC also sponsors the National Memorial Day Parade in WDC.  30