Rosslyn, Virginia.  During the course of a return visit with members of the Japanese American Veterans Association in Washington, D.C. on November 9, 2009, Greg Robinson discussed his recently published book, A Tragedy of Democracy: Japanese Confinement in North America at a luncheon in Rosslyn, Virginia,   A native of New York City, Dr. Robinson is associate professor of history at l'Université du Québec à Montréal and author of another book, “By Order of the President: FDR and the Internment of Japanese Americans”. 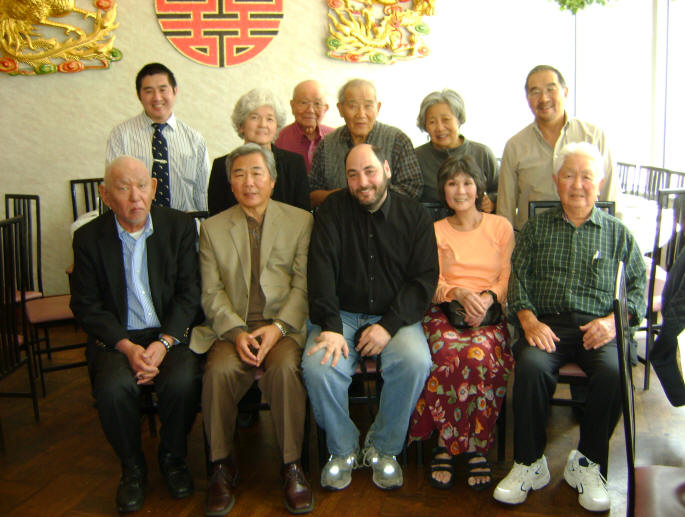 Robinson said A Tragedy of Democracy offers a “fresh look at a familiar subject, Executive Order 9066 and the removal and confinement of West Coast Japanese Americans during World War II (commonly called the Japanese internment).”  He wrote of events beyond the wartime period and discusses the postwar and prewar years.  He said “the book reveals for the first time the massive government surveillance of Japanese communities during the 1930s, and the construction by the Army and the Justice Department of what were termed concentration camps for enemy aliens.  All of this helps show how much of a momentum for mass suspicion and arbitrary treatment of Japanese Americans on a racial basis had been created even before the war.”

More importantly, A Tragedy of Democracy is the first-ever North American history of confinement.  The book breaks new ground by looking at the history of the camps in the United States alongside the Canadian government’s wartime removal of 22,000 citizens and residents of Japanese ancestry from the Pacific Coast of British Columbia.  Robinson said “I also compare official policy toward Japanese Americans with that in wartime Hawaii, where fears of “local Japanese” led to a declaration of martial law after Pearl Harbor, the establishment of a military dictatorship, and replacement of civilian courts by military tribunals.  I also shed new light on the histories of the Japanese Latin Americans kidnapped from their home countries and interned in the United States, plus the 5,000 Japanese expelled from Mexico’s Pacific Coast.”

Robinson said, “what happened to Japanese Americans is part of a larger history, and it is useful to look at their experience alongside that of their counterparts elsewhere. Moreover, if we study events and official policies in Canada and Mexico, which are neighbors with certain similarities in their politics, culture and economies, we get a clearer idea of the causes and results of confinement in the United States. For example, in Canada, the Army and Navy chiefs opposed mass removal, but it was ordered nonetheless. This tells us something about the importance of military opinion in the decision making process in those countries. In Mexico, ethnic Japanese were ordered off the west coast in the beginning of January 1942, more than a month before Washington took similar action and several months before Mexico even declared war on Japan. If the Mexicans did this so quickly, why did the Americans wait?”

Robinson concluded his remarks as follows:  “By studying Japanese American confinement within a continental—indeed international—pattern, we can learn more about its causes as well as the results for its victims.”  30