Washington, DC.  As the result of the National Veterans Network widest reach to contact the maximum number of vetertans,  three hundred seventeen 100th Battalion, 442nd Regimental Combat Team and the Military Intelligence Service veterans, a number of them in their late 90’s, visited Washington, DC from all parts of the nation, including overseas, for the Congressional Gold Medal Awardon November 2, 2011 at the US Capitol.   The total number of veterans, widows, next of kin of soldiers who died in line of duty and family members, who participated in this and associated events during the three-day period, were over 3,000.

The dignified award ceremony at the US Capitol was attended by 1,250 Japanese Americans in the Emancipation Hall and two theaters – a ceiling imposed by Congress.  An over-flow crowd saw the program live at the Washington Hilton Hotel Columbia Hall.  The award program was carried live, nationally, over C-Span and the Pentagon Channel so viewers, including by Nisei veterans, could view the program live from anywhere in the world. 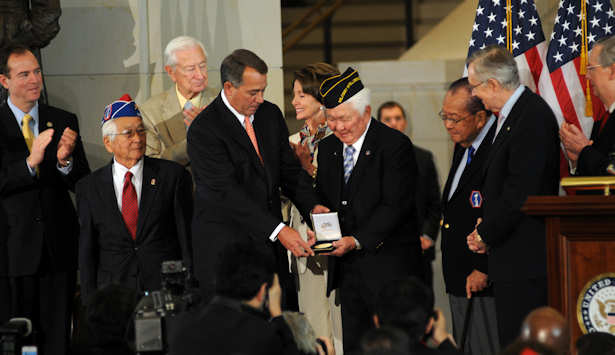 On November 1, 2011 the WW II Nisei Veterans program, that consisted of the award of 40 Bronze Star Medals, was held at the Washington Hilton Columbia Hall for over 2,500, followed by a wreath laying ceremony at the Freedom Wall of the National World War II Memorial on the Mall.  About 150 veterans, who were transported to the nation’s capital by Honor Flight participated in this ceremony.  General Raymond T. Odierno, Chief of Staff of the US Army,  who pinned the BSM on the veterans said in his keynote address: “Today, diversity is the foundation of our strength, the strength of our Nation, the strength of our Armed Forces, and the strength of our Army, and you all are the foundation of that strength.”  Throughout the day, veterans and their families were bused to the Memorial.

JAVA reporter contacted a cross section of the population to inquire what the Congressional Gold Medal award means to them:

An inductee into the Ranger Hall of Fame and one of the most highly decorated Japanese Americans in the Vietnam War, Ranger Vincent Okamoto of Torrance, CA,  said, the congressional Gold Medal “symbolizes the Nisei loyalty, courage, fundamental fairness and personal dignity and (this) is a testament to the glory of the human spirit.  This is the legacy of what the Nisei veterans passed on to us. This is our inheritance.”

The Honorable Ichiro Fujisaki, Ambassador of Japan, said “Congratulations!  It's a great honor.  The Nisei well deserve it.  They fought honorably for their country despite the difficulties they were placed in.  Thus, they paved the way to the present place of great respect and esteem to which they are held in this great country.  They achieved this so gracefully and with dignity.  They won the admiration of not only the people in America.  We in Japan are truly proud of the Nikkei.  From the bottom of our hearts, "Omedetou gozaimasu".

Gerald Yamada, JAVA President, shared these views:  The Congressional Gold Medal bestows the highest civilian honor on the Nisei soldiers who proved, with valor and blood, that the federal government was wrong to unjustly imprison 120,000 persons of Japanese ancestry during World War II and to question their loyalty as Americans after the attack on Pearl Harbor.  All Americans of Japanese ancestry -- past, present, and future generations -- have benefited from this recognition.

Three fifth grade students from the Senator Spark Matsunaga Elementary School in Germantown, Maryland, who studied the Japanese American experience during WW II as part of their classroom work, submitted this joint statement:  “The Congressional Gold Medal reminds us that true Americanism is about heart and mind, not physical appearance. These men have set the guidelines to the true American spirit.  By volunteering for combat duty, they put their country first and risked their lives to prove their loyalty.  Kelly Souza, Angela Wang and Michelle Zhang

William Thompson, President of 442nd Veterans Hawaii and Hqs Company, 2nd Battalion,  said “the award of the Congressional Gold Medal to the Nisei soldiers of WWII not only recognizes their unwavering patriotism but symbolizes what Americanism is all about.”

Mark Pim, US and world history teacher at a Montgomery County, Maryland,  Public School, said the Japanese American experience is important to history teachers because

"the stories of the Japanese American internment demonstrates that nations can make great mistakes.  Individuals can then make courageous choices to demonstrate their loyalty.   Great nations can change and recognize those individuals for their acts of courage and loyalty."

Colleen Bernard, Social Studies Department Chair at the Oakdale High School in Frederick County (Maryland) said:  “the fact that our nation embraced its past and elevated these deserving Americans to the status that they were due, propels us closer to fulfilling the dream upon which our nation was founded -- "that all men are created equal, and endowed by their Creator with certain unalienable rights".

MAJ Keith Horikawa, Commanding Officer, 100th Infantry Battalion, 442nd Infantry. whose unit participated in the Washington, DC congressional gold medal  programs, said:   “Honoring our Nisei veterans at the Congressional Gold Medal Ceremony has been an absolute honor for the current members of the 100th Bn, 442nd Inf as we strive to uphold their examples of honor, courage, and perseverance.

MG Jason Kamiya, USA (Ret) said, “Seeing the CGM bestowed on the 100th/442nd/MIS was significant in 3 ways.  First, as a son of a 100th Inf Bn veteran it made me even prouder of my dad.   Second, as a veteran, it underscored the responsibility I share with other Japanese American veterans to keep memories of "the boys" alive among those who currently serve. And third, as a father, the CGM reemphasized “legacy".  30