White House.  Robert Nakamoto, President of Japanese American Veterans Association, and Gerald Yamada, JAVA General Counsel, were invited to the White House on October 22, 2009  to witness the signing ceremony of the Veterans Health Care Budget Reform and Transparency Act.  This landmark legislation fundamentally reforms how health care for our veterans is funded. 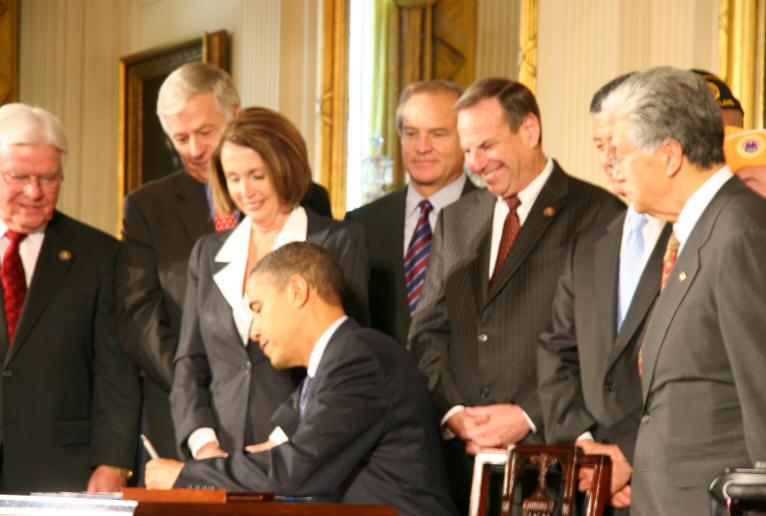 The purpose of this Act is to provide appropriations for veterans’ medical care a year in advance.  With advance appropriations, the VA will have more time to budget, to recruit high-quality professionals, and to invest in new health care equipment for VA hospitals and clinics.

President Obama said that he takes special pride in this legislation because “as a senator I was a proud co-sponsor of this legislation. I served on the Veterans Affairs Committee. In the campaign last year, you all remember, I made a promise to pass it. And today as President, I'm fulfilling that promise and I'm going to sign it into law.”

House Speaker Nancy Pelosi and Senator Daniel Akaka were among the Members of Congress recognized by the President as leading the fight for passage of this legislation.  The President also thanked VA Secretary Eric Shinseki for his efforts in building a 21st century VA.

Following the President’s signature, Chairman Akaka, who sponsored the legislation in the Senate, said:“Today we bring fundamental change to VA health care by replacing a dysfunctional process with a procedure for timely, predictable funding, I thank the President for his support and give due credit to the veterans, servicemembers, families, and concerned citizens who came together to help us turn this great idea into law.  Hospital mangers will now be able to plan wisely for the year ahead, and I look forward to seeing VA’s resources go further for veterans and taxpayers.”  30