Lincoln, Nebraska. On August 1, 2007, Nebraska Governor Dave Hineman
and First Lady Sally Ganem hosted a premiere of "Most Honorable Son",
a documentary on the life of Ben Kuroki, at the Embassy Suites Hotel
in the state's capital.  Kuroki, a Hershey, Nebraska native, flew 58
missions in Europe and the Pacific as gunner during World War II.  The
documentary drew a standing ovation from the audience of 600 when
retired news anchor Tom Brokaw gave the introduction via video-tape.
"His story is one of the most profound examples of patriotism and
service to our country," Governor Heineman said.  "Most Honorable Son"
was broadcast on the national Public Broadcasting system (PBS) at
prime time on September 17, 2007. 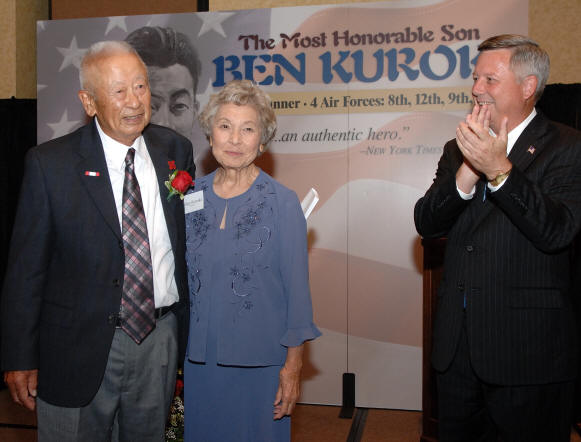 The premiere also paid tribute to all Nebraska veterans and to
survivors of the historic Ploesti mission.  On that mission, fifty-two of the 178
planes were lost and more than 300 airmen were killed in the low-level
raid on the oil refineries, Hitler's "gas station."  Thirteen
survivors, including Kuroki and his crew's navigator, Lieutenant
Colonel Ed Weir, were present at the viewing of the film. Weir had
submitted an eye witness account to the War Department, urging a
Distinguished Service Medal for Kuroki.  Weir traveled from Texas and
the reunion with Kuroki at the premiere was their first since 1946.
Among the dignitaries attending the premiere were Rear Admiral Jim
Partington, a Vietnam veteran with over 250 combat missions; retired
General/Bishop William Dedinger; and James B. Milliken, University of
Nebraska President.

Kuroki was especially touched by the presence of a former school girl
that he had met 61 years ago after he had talked of his experience to
a groups of students.  In 1946, June Woodman was attending school at
Armonk, New York when Kuroki spoke to her eighth grade class about his
"59th mission," his fight against racial intolerance.  Woodman had
journeyed from her home in Maine to attend this showing of the
documentary and told the audience how Kuroki opened her eyes to the
insidiousness of discrimination.  She thanked Kuroki personally.

Kuroki recognized the exemplary efforts of Mr. Bill Kubota of KDN
Films and Nebraska Education Telecommunications in producing such a
well-received documentary.  In describing his desire to make the
documentary, Kubota who is from Madison Heights, Michigan, said Kuroki
had long been a mythic figure to Japanese Americans like himself.  His
story of bravery even was told in a comic book.  Kubota's father was a
boy when he was impressed by Kuroki's visit to the Minidoka, Idaho,
internment camp.  Kubota’s father urged him to produce the documentary.

Kuroki expressed gratitude to his Nebraska friends and his 93rd Bomb
Group for “going to bat for him so many decades after the fact."  He
credited booklets produced by the late Cal Stewart that played key roles in his
receiving the Distinguished Service Medal in 2005 and three invitations to the White House in 2006 and 2007.

" 'Most Honorable Son', the title of booklets and documentary, was the
moniker given me by crew member Red Kettering," Kuroki explained.
"He did not mince words in calling the Japanese enemy dishonorable
S.O.B.s.  In contrast, he tagged me at first as just Honorable Son.
However, after facing enemy gunfire together, his esteem for me was
somewhat escalated and he upgraded my title to Most Honorable Son."
Kuroki called the premiere an incredible day in his life.

In addition to Kuroki, there were only two other Nisei who served in
air combat missions during WW II.  They were Herbert Ginoza, a native of
Honolulu, Hawaii who now lives in Mountain View, California and the late John H. Matsumoto of Altadena, California, both gunners. 30