Washington, D.C. Four Japanese American veterans of the U.S. Army have been featured in two books published by the Library of Congress Veterans History Project. The life of Dr. Warren Tsuneishi of Bethesda, Maryland, a Military Intelligence Service veteran of the liberation of the Philippines, was included in the Voices of War, published in 2004. The experiences of Yeiichi Kelly Kuwayama of Washington, D.C. and Dr. Norman Ikari of Montgomery Village, Maryland, both veterans of the famous 442nd Regimental Combat Team, and Carolyn Hisako Tanaka of Cleveland, Ohio, a nurse in the Vietnam War, were written up in Forever A Soldier that was published on November 8, 2005. 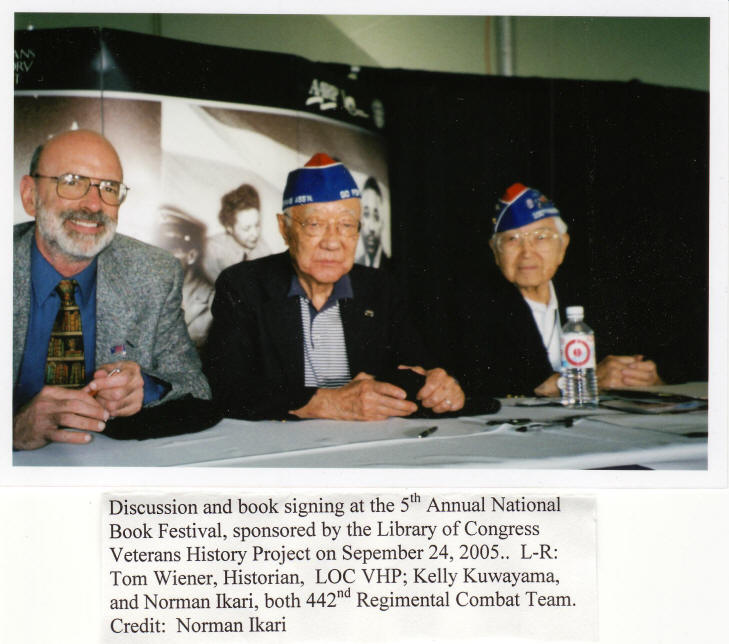 Tom Wiener, historian at the Library of Congress Veterans History Project, edited the Voices of War and authored Forever a Soldier. Both books were published by the National Geographic Society, Washington, D.C. Voices of War, representing interviews from 30,000 oral history interviews, used a wide selection of viewpoints. Forever a Soldier, culled from oral histories, letters and diaries of 37 men and women with diverse background and ethnicity, used the veterans own words. The one common element of all is they answered the call of duty with a single motivation: patriotism.

The Veterans History Project plans to publish more books in this series. Tsuneishi, Kuwayama and Ikari are members of the Japanese American Veterans Association, (www.javadc.org) a nationwide veterans service organization which serves the interests of Japanese American and Asian American veterans.

Later this year the Veterans History Project plans to tour Forever a Soldier in four cities: Indianapolis, Indiana, Palm Coast, Florida, Chattanooga, Tennessee, and Atlanta, Georgia. One veteran each at Indianapolis, Palm Coast and Atlanta and two at Chattanooga are profiled in the book. The VHP partner organization at each location will jointly sponsor and arrange the program, including remarks and book signing by the local veterans featured in the book and Wiener.

Wiener said Tsuneishi’s profile was selected for Voices of War because “I was interested in someone being named for a President of the U.S., growing up as a second-generation Japanese American, and seeing his family scattered across the country by a wrongful act of our government--and all through that, still willing to put his life on the line for that government. Ikari and Kuwayama’s profiles were selected for Forever a Soldier because they overlapped and also because they showed how two men from opposite ends of the country - with very different family experiences during the war -- wound up in the 442nd Regimental Combat Team, the most decorated unit of its size in U.S. Army history. Tanaka’s story attracted me for the central fact that her family was victimized by the relocation order of 1942 but she chose to serve her country over 20 years later in Vietnam in spite of that fact, Wiener said.”

“Our goal in these books is to show the amazing diversity of VHP’s collections and to remind people of the commonality of war. The uniforms and locations and armaments may change, but the basic human emotions – fear, pride, sorrow, regret, joy, relief, determination -- are a constant. We want our readers to know what sacrifices these men and women made; what incredible courage they displayed, whether on the battlefield or in a prison camp or in a field hospital; and to know that war can extract a terrible price, not just in lives lost but in hearts and minds broken,” Wiener said.

Wiener said he “selected the stories that were most dramatic, not always on a big stage, but also sometimes in intimate terms. Forever a Soldier contains stories of a sailor who survived the Pearl Harbor attack, of prisoners of war somehow holding on through inhumane treatment, of a soldier liberating Dachau in the closing days of WWII. It also contains a story of a radarman who was the first African American to serve in that position in the Second World War, and how he got his first break to board a ship when the officer in charge asked him only one question: ‘Did you finish radar school?’ At the age of 80, this veteran breaks down in recalling that one moment that changed his life forever, even though it occurred 60 years before.”

Wiener continued, “I also included the story of a young man who ran away from home in October 1964, his senior year of high school, to join the Army and serve in Vietnam. He was underage, he knew his parents would not sign for him (they wanted him to go to college first, then serve; his father had been in the Army in WWII and in fact his story is in Voices of War). The boy couldn't wait, and he eventually persuaded his parents to sign for him. He was killed in Vietnam in June 1966, on his 19th birthday. Though his parents grieve for him, they respect that he died doing what he wanted to: serving his country.”

“The format of the second book, Forever a Soldier, was different in that I would relate, using the veterans' words as much as possible, a number of individual stories, one at a time. The first book, Voices of War, contained a mosaic of voices and viewpoints, though not everyone's story was told in toto. I was intent on selecting the best material from the interviews, diaries, letters, and memoirs for inclusion, allowing the veterans' words to tell the story, with me providing introductory and connecting material. For each of the seven chapters in Voices of War, I did tell one person's story in light of that chapter's theme. In Forever a Soldier, the organization was by types of experience: tales of nurses and doctors were in one chapter, survival stories in another, combat tales in another, and so on,” Wiener said. 30