FOR PHOTO:    Go to www.javadc.org, scroll down to press release, pictures embedded in article.

Maj. Gen. David E. Clary, Director of Current Operations and Training of the Deputy Chief of Staff for Air, Space and Information Operations, US Air Force, and a recent returnee from assignment in Izmir, Turkey, was the featured guest speaker at the Japanese American Veterans Association’s  quarterly membership meeting on October 21, 2006 at the Harvest Moon Restaurant at Fall Church, Virginia.  Speaking to 70 members and friends at the luncheon, he said the US Air Force’s top priority is to “win the global war on terror as part of the joint team. 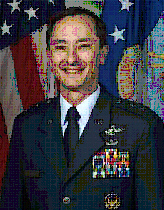 General Clary, a Japanese American, described the successful air strike in June 2006 that killed Abu Musab Al-Zarqawi, leader of the militant Al-Qaeda in Iraq, the 20,000 airmen and 268 aircraft deployed in support of operations in Iraq and Afghanistan, and the projection of an unmanned inventory of approximately 54 Global Hawk and 189 Predator unmanned aerial vehicles.  The airmen performed duties that included 5,000 jobs normally undertaken by the Army and Marines such as convoy operations, interrogation and detainee operations.   All Air Force personnel attending the senior NCO academy, Command and General Staff College, and Air War College will be required to study Spanish, French, Arabic or Chinese.  Clary said the USAF has realigned its resources “for the long war against an elusive, non-traditional and irregular enemy”.

General Clary entered the USAF in 1976 after graduating from the US Air Force Academy, Colorado Springs, Colorado.    He has commanded two squadrons, a group and two wings, and he has served as the Operations Director to the Joint Task Force southwest Asia.  He has completed a Navy exchange tour and has 160 carrier landings.   A command pilot with more than 4,500 flying hours, primarily in attack and fighter aircraft, General Clary has participated in various operations accumulating over 200 combat hours.

General Clary was graduated from various military schools and Troy State University, New York, from which he received a MS degree in management.    His duty assignments have included various posts in the US and in England, South Korea, Italy and Turkey.  His decorations include the Defense Service Medal, Legion of Merit with Oak Leaf Cluster and 22 other awards.

In his remarks, special guest Mr. Jess Quintero, President of Hispanic War Veterans of America, said his organization is proud to have a liaison relationship with JAVA and wish to join forces with JAVA to work on veterans issues.

In the absence of President Bert Mizusawa, who is deployed to Iraq, Vice President Cal Shintani was the official host.  Deputy Executive Director Michael Yaguchi, officiated as the Master of Ceremony.  The chairman of the reception committee was Ms. Barbara Nekoba.