Vosges, France.  Today, 30 October 2009, marks the observance of the 65th anniversary of the "Lost Battalion" engagement. On this day 65 years ago, the 442nd Regimental Combat Team completed its mission to relieve the 211 men of elements of the 1st Battalion, 141stst (Alamo) Regiment, 36th (Texas) Infantry Division, trapped and doomed for annihilation, in the Vosges mountains of northeastern France. On November 1, 2009 the National Japanese American Memorial Foundation is sponsoring in Houston a gala reunion of veterans, families and friends of the trapped battalion, the 442nd RCT  and the 405th Fighter Squadron.

When elements of the First Battalion, 141st Regiment left the line of departure under leaden skies and light rain shortly before noon on 23 October 1944, they had no reason to expect this action would be any different from any of the engagements they had seen during the seventy consecutive days they had been "In the Line" since the Operation DRAGOON landings at CAMEL BLUE BEACH, southern France, on 15 August 1944. They  had no way of knowing as they stepped-off and proceeded up the trail into the Foret Dominaile de Champ, that they would be stepping off into a remarkable chapter of American Military History. 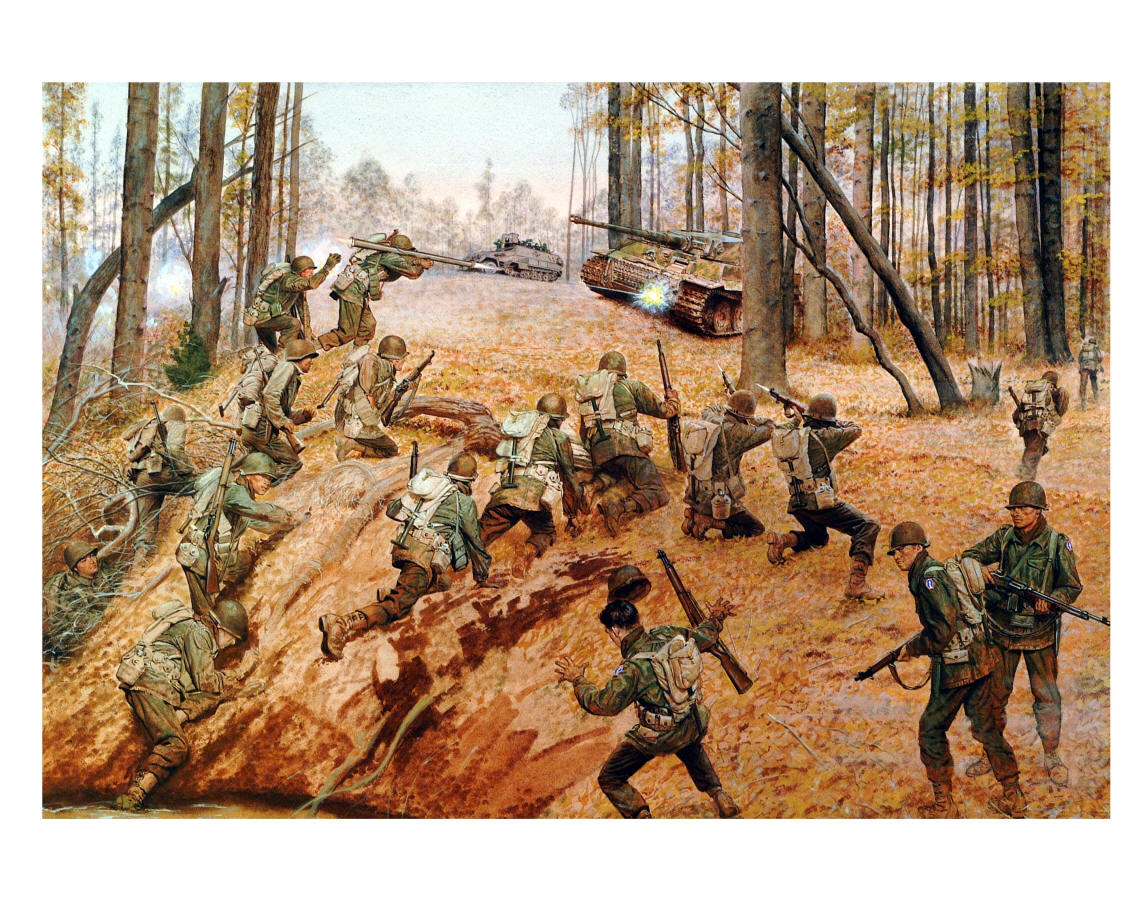 Painting of “The 442nd Rescue of the Lost Battalion in Vosges, France” by Charles McBarrow.  Courtesy of the Army Art Collection, U.S. Center of Military History.  An enlarged picture hangs just a few paces down from GEN Eric Shinseki's official portrait on Corridor 4-5, second floor, just off the A-ring at the Pentagon. Photo by Lt Col Michael Yaguchi, USAF (Ret).

Following is a day by day chronicle of events that resulted in the rescue:

24 October 1944.   By the afternoon of 24 October the First Battalion, 141st Regiment had fended-off a number of attacks along its flanks, the worst of which waited ahead of them. They soon learned they were cut-off and surrounded by a superior enemy force comprised of 933 Volks-Grenadier and 198 Fusilier Battalion troops. Companies A, B, and C of the First Battalion had faced the 198th Fusilier Battalion before, at St Ame, France.  Co A captured 175 Germans including the battalion commander and staff. The enemy had overrun the First Battalion, 141st HQ and constructed a series of roadblocks to further isolate the forward elements from the command elements. Small patrols were sent from the First Battalion to contact the mission force but were turned back. To further compound the situation 2nd and 3rd Battalions of the 141st Regiment on the left flank had been stopped cold, meeting stiff resistance.  Killed in Action (KIA) -  10.  First BN, 141st Regt.

25 October 1944:  A medium patrol set out in the morning to reestablish a supply route and communication – it soon returned. Later that day a large 50-man patrol of volunteers was sent from the First Battalion, 141st to break through to the mission force only to be trapped by a high density mine field of Shu mines (the dreaded "Bouncin’ Betty”) and pre-sighted MG 42 machine gun and mortar fire. Only five men of the 50-man patrol returned late on the evening of the 26th.  KIA- 2.  141st Regt.

26 October 1944:  Enter the 442nd Regimental Combat Team.  The 442nd RCT, just withdrawn for hot shower and rest after capturing Bruyeres, Belmont and Biffontaine, was ordered to break through to the surrounded Texans who had not eaten in three days. More importantly for the First Battalion, 141st, they were critically low on ammunition. Facing the Nisei warriors of the 442nd RCT were torturous mountain terrain and elements of Gebirgsjäger (Mountain troops) and elements of 933 Volks-Grenadier troops. The action took on the aspect of jungle warfare with intense undergrowth and razorback mountain terrain, all with abysmal weather conditions including sub-freezing temperatures at night, a near-constant rain, frozen rain, with an occasional dusting of light snow at higher elevations. On the evening of the 26th the call went out from First Battalion for a supply air-drop.  KIA - 3. 141st Regiment.

27 October 1944:  Enter, the 405th Fighter Squadron, 371st Fighter Group, 70th Wing, 9th U.S. Air Force, XIIth TAC. Early on the morning two flights of P-47 "Thunderbolts, one designated "Green Flight," left the 405th F/Sqdn base at Dole/Tavaux, approximately 100 miles southwest of the "Lost Battalion's" position. Due to bad weather that grounded all other flights, the 405th would be the only unit airborne in all of France. The first sortie was disastrous. Green flight's 1st Lt Robert A. Booth flying Green Four, "spun-in," slamming into the mountainside in the Val d' Ajol, near the village of Fougerolles. Once the flights were over the drop zone they learned it was completely socked-in, "10/10," or zero visibility. On the return flight in restricted visibility, 405th Squadron commander Major J. W. Leonard's wing tip struck a tree. Leonard managed to bring his crippled "T-Bolt" home.  KIA-2.  405th – 1; 442nd -1.

28 October 1944:   the 442nd RCT encountered ever-stiffening enemy resistance. The 405th encountered zero visibility over the drop zone and met with little success in dropping supplies to the First Battalion. Major Leonard's aircraft was lost due to "friendly fire from a 45th Infantry M-16 Quad-.50 calibre AAA machine gun battery over Epinal. Major Leonard bailed out and parachuted at an altitude of less than 300 feet.

29 October 1944:  this sixth day, was the toughest. A tremendous artillery barrage preceded the first enemy assault of the day. The deafening thunder of the barrage gave way to the staccato sound of German machine gun fire. The unique sound of the German MG 42 machine gun split the morning silence and signaled the commencement of the attack. The Lost Battalion light and heavy machine gunners took a heavy toll on their attackers. All units met with success: The 3rd Battalion/442nd RCT mounted their "Banzai" charge on Hill 617, breaking enemy resistance and clearing their path to the trapped Battalion. The pilots of the 405th Squadron, through superior airmanship and sheer determination hit the mark with the majority of their supplies. There was rejoicing below as the 405th strafed enemy ground troops. Armed with food and ammunition, the men of the Lost Battalion who had now been without food for five days, repelled the largest enemy ground assault of the seven-day siege. KIA- 22.  442nd .

30 October 1944:  The Germans laid down smoke in the morning. The men of trapped Battalion braced for a massive ground assault. The assault never came, the smoke was not to cover their advance, but to cover their retreat. Late in the afternoon, Co A, 141st weapons platoon "top kick," T/Sgt. Eddie Guy of New York City, who commanded Co A’s .30 caliber "light" machine gun, observed some movement in front of his position. T/Sgt Tak Senzaki and Private Mutt Sakumoto , of the 3rd Battalion, 442nd, advanced toward T/Sgt. Guy's position on the defensive perimeter. Sakumoto nonchalantly asked Sgt. Guy: "Do you guys need any cigarettes?" KIA - 5. 442nd.

The 442 RCT suffered over 50 KIA, an estimated 286 wounded in combat, and over 250 non combat related casualties (e.g. frost bite, trench foot) in the breakthrough effort to reach the "Lost Battalion.”   In the Vosges forest invasion from September 29, 1944 to November 7, 1944, including the relief of the trapped Battalion, the 442 was awarded the following decorations:  five and one half of their total seven Presidential Unit Citations, four of their total 21 Medals of Honor, and ten of their total 29 Distinguished Service Cross.  These numbers graphically illustrate the intensity of combat that the 442nd experienced in that campaign.

The trapped Battalion, commanded by 1st Lt Martin Higgins, despite being low on ammunition, repeatedly repelled German attacks. This stubborn and gallant defense mounted by the "Lost Battalion," made possible, by the re-supply efforts of the 405 Fighter Squadron, coupled with the valiant efforts of the 442 RCT forced the Germans to retreat. The ground above La Houssiere so doggedly held by the “Lost Battalion” served as a springboard for the subsequent assault on St. Die,  the gateway for the Allied advance to the Alsatian Plain. The units of the US 7th Army engaged in this phase of Operation DOGFACE would be the first military force since the Emperor Julian in 357 AD, to defeat a force defending the Vosges mountains.

The Lost Battalion unit strength when Co I, 3rd Battalion, 442 broke through was: Co A: 45 men; Co B: 71 men; Co C: 81 men; and Co D: 14 men. News of the breakthrough traveled fast though the Lost Battalion defensive perimeter, 2nd Lt. Erwin Blonder sent the message: “Patrol from 442 here. Tell them we love them.”

To our fallen friends and comrades in the 141st Regiment and the 442nd RCT;  Forces Françaises de l'intérieur (FFI), the French underground, which assisted the 442nd ; the Vosges people who provided their homes and comfort to the wounded 442nd soldiers; and the 405th Fighter Squadron who answered their nation’s call and gave their lives so that others may live in freedom: “We reflect on what their lives might have been, but never will be.” Their sacrifice reminds us that the “richest garments of our nation’s character are often sewn with the crimson threads of sacrifice and suffering.” Their sacrifice is our challenge to remember.  30