Based on Veterans Affairs Press Release.

Washington, D.C.  On October 18, 2006, R. James Nicholson, Secretary of Veterans Affairs, and leaders of major veterans organizations called on America’s veterans to help kindle a new spark of patriotism on Veterans Day by wearing the medals they earned during military service.

Yeiichi Kelly Kuwayama, a combat medic wearing his Silver Star, Purple Heart, French Legion of Honor medals earned as a soldier in the famous 442nd Regimental Combat Team, and Grant Hirabayashi, a Merrill’s Marauder member wearing his Presidential Unit Citation ribbon, Combat Infantryman’s Badge, Bronze Star, and Ranger Hall of Fame Induction Medal, were among  some 12 Veterans Service Organizations’ representatives who stood behind Nicholson to help him launch the initiative.  Kuwayama told the Stars and Stripes reporter he had to search to locate his medals.  “Once you get them, …you don’t want to parade around and show off.  But now I have a reason to put them on,” he said in reflecting on his World War II experiences. 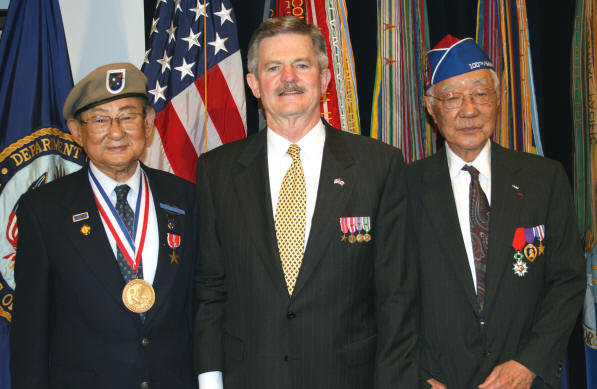 “We are announcing a Veterans Pride Initiative to remind Americans of the pride and honor in the hearts of those who have served”, Nicholson said.  “We expect Americans will see our decorated heroes unite in spirit at ceremonies, in parades and elsewhere as a compelling symbol of courage and sacrifice on Veterans Day, the day we set aside to thank those who served and safeguarded our national security.”

The campaign is modeled after a tradition in Australia and New Zealand, countries who honor the Australian and New Zealand Army Corps (ANZAC) on April 25.  ANZAC Day sees veterans wearing their military decorations whatever they are doing on that day.  Nicholson said he hopes a U.S. tradition will ensue to emulate this pride in being a veteran and in honoring our veterans.

Nicholson called on “veterans to wear your pride on your left side this Veterans Day.  Family members, wear your pride in your departed veteran’s service on your right.  Let America know who you are and what you did for freedom this Veterans Day.”  He further commented, “Wearing these medals and ribbons will demonstrate the deep pride our veterans have in their military service  and bring Veterans Day home to all American citizens.”

A Veterans Affairs Question and Answer paper said, “An internet search for ‘military medals’ will generate considerable advertising links from private firms selling replica medals including miniatures.  Retirees may wish to check with military exchanges or military clothing stores.   Under certain circumstances official replacements for lost or damaged medals may be obtained from the government by veterans by sending a request to the appropriate branch of service.  More information and links to initiate requests are available at http://www.va.gov/veteranspride/.”  30