Mannheim, Germany. This past summer, the President of the American Bar Association (ABA) appointed Major Kay Wakatake, U.S. Army, to the ABA Standing Committee on Armed Forces Law (SCAFL); the appointment is for a three-year term.  Wakatake is an attorney on active duty in the U.S. Army Judge Advocate General’s Corps.

SCAFL is dedicated to working with its various military and civilian liaisons and advisors to ensure that the military justice system, the environment for the practice of law, and the protection of service member's rights, remain the best it can be.  It studies and makes recommendations on the administration of laws, regulations, and practices in the Armed Forces and the courts-martial system; the protection of the legal rights and constitutional guarantees of personnel in the Armed Forces; and the ability of lawyers and judges in the Armed Forces to practice in conformity with all applicable American Bar Association standards.  The Committee is composed of civilian practitioners with extensive experience in the armed forces and military lawyers, full-time, retired and reserve. 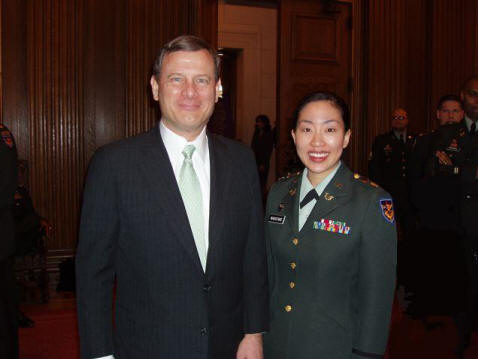 Wakatake was a successful criminal prosecutor while stationed with the 2nd Infantry Division for two tours of duty near the demilitarized zone in South Korea.  As a medical malpractice defense attorney in Fort Lewis, Washington, she skillfully defended the U.S. Army against multi-million dollar lawsuits.  While a legal assistance attorney, she advised over 400 clients on various matters such as estate planning, family law, consumer law, and landlord-tenant law.  Wakatake also held leadership positions such as Chief of Legal Assistance at Fort Lewis, Washington, where she supervised an office of 21 people, including thirteen attorneys.  During her tenure as Chief of Legal Assistance, her office received the Army JAG Corps Award for Outstanding Legal Assistance Office.  During her assignment to the Judge Advocate Recruiting Office, the Army JAG Corps exceeded its recruiting goals by hundreds of qualified applicants in contrast to other branches of the Army.  Recently, the Army JAG Corps recognized Wakatake’s leadership skills and assigned her to be the Officer in Charge of the Mannheim Law Center, supervising the largest U.S. Army Law Center in Europe.

Wakatake actively serves the community as well.  She is the first female and the youngest person to serve on the Board of Directors of the Japanese American Veterans Association (JAVA), the premier veteran’s service organization for Asian American veterans.  She is also Editor of the JAVA ADVOCATE, its quarterly newsletter.

Wakatake received her Bachelors of Arts degree from the University of Notre Dame, her Juris Doctor from Pepperdine University, and her Master of Laws from the U.S. Army Judge Advocate General’s Legal Center and School.  Wakatake was commissioned a 2nd Lieutenant in the U.S. Army through the ROTC program at the University of Notre Dame,  where she was a Distinguished Military Graduate.  She is a member of the bars of the United States Supreme Court and the state of California. 30